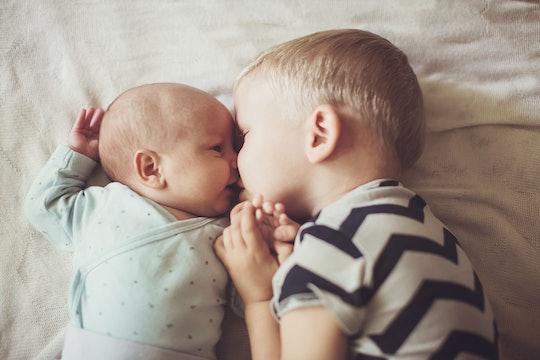 How Having An Older Brother Makes You A Better Person, According To Science

Deciding to have one child is, for many, a big life decision. But deciding to have another child? Well, that can be even more challenging. Not only do you have to worry about the normal logistics, but you worry about how another child will impact the one you already have. As my kids have gotten older, I've seen so much of my oldest son manifest in my daughter — and it's awesome. I'm convinced having an older brother makes you a better person and, as it turns out, there's science that backs me up.

Of course, as with anything involving complex human relationships, there are a ton of factors that go into this. So while there may be generalities, it's important to remember that every person, and therefore every family dynamic, is different. But according to researchers from University of Calgary, Université Laval, Tel Aviv University, and the University of Toronto, if your older brother is kind and supportive, that's going to have a positive impact on your own empathy.

In the book Sibling Relationships Across the Lifespan, developmental psychologist Dr. Victor Cicirelli, Psy.D., suggests that children benefit cognitively from the influence of their older siblings. There's also a little something called "the sibling spillover effect," which shows that a younger sibling has a better chance of performing well academically when they have an older sibling who has done the same.

Empathy. Cognitive development. Good grades. As an older sibling myself, I feel like my younger siblings should be calling me on a daily basis to say thank you. (You're welcome, guys.)

Dr. Sanam Hafeez, M.D., a New York City neuropsychologist and faculty member at Columbia University, tell Romper that it's not just younger siblings who benefit from all their older brother's awesomeness. "An older child can benefit by playing the role of protector, nurturer, and guider," she says. "They can model good behaviors and coping skills for their younger siblings. ... Older children also learn forgiveness, such as when the younger sibling breaks their favorite toy by accident. They learn patience when the younger one is trying to master a new task, like tying shoes. They learn to be part of a team and assist their parents in taking care of the younger sibling. The older child may also experience a boost in [their] self-esteem as a result."

In my own experience, this is all true. Because as much as I see my son in my daughter, I also see the positive impact my daughter has had on my son. My stubborn boy has had to learn compromise, how to articulate his feelings and whatever scheme he wants to get his sister to join him in, and how to share. A lot of things that, yes, he probably would have learned at some point, he learned early as a result of having his younger sister around. He is made better by her presence.

So what can parents like me do to ensure that my children have a positive impact on one another? Dr. Hafeez has some thoughts on that, too.

"The very best thing parents can do, whether they have same or different sex siblings, is to see is child as an individual where the only coincidence is that they come from the same parents," she says. "Children are not clones of each other. The worst things parents can do is to compare one child to another or pit one child against the next in any competition."

In other words, the best way to let them learn from one another is to let them be who they are as individuals.