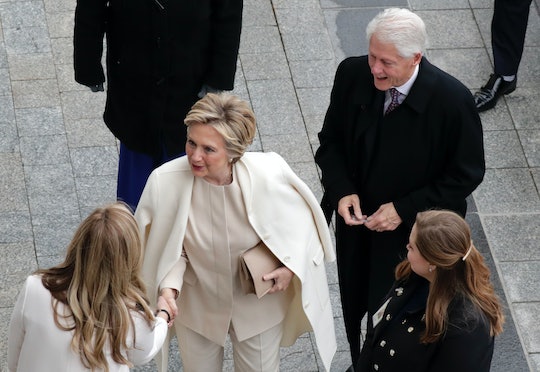 The Message Behind Hillary's Inauguration Outfit

As public officials and statesmen show up for the Inauguration of Donald J. Trump, Secretary of State Hillary Clinton garnered tons of applause and support as she made her debut. Her appearance is a big deal after her loss to Trump during the 2016 election, but how Hillary Clinton is making a statement wearing white at the Inauguration is even bigger.

Known for her pantsuits, a lot of people expected Clinton to show up to the Inauguration in purple. According to Vanity Fair, purple is the color she wore during her concession speech and it had its own symbolism — it was a show of support. Often, swing states (the states that could go either way in an election) are called purple states as they are neither red or blue. It was a show of being bipartisan, of unity, of bringing together the country at a moment when it was still so divided. It was a bold choice on her part and its symbolism wasn't lost on America or her supporters.

It would seem like a good choice for the Inauguration. Since, as CNN note, many Democrats weren't attending the Inauguration of Trump, Clinton's arrival was huge. If she had been in purple, it would've been a great way to show off her support and unity even more. But her choice of white is a much bigger deal.

According to History.com, Clinton also wore white at the final presidential debate and when she accepted the Democratic nomination. Why? Because it is a symbol for suffragettes. History.com noted that in 1908, three colors were chosen to identify the suffragette movement — white, purple, and green. Purple was for dignity, green was for hope, and white was for purity.

Its symbolism isn't lost on today. Not only because Clinton has been a huge supporter of women's rights (and Trump hasn't been), but because she had hoped to be the one taking the stage for the Inauguration today. She made history. She wanted to be the first female president. In fact, most of the country did, too. According to CNN, Clinton defeated Trump in the popular vote and won by almost 2.9 million votes. Although she lost by the electoral college and therefore did not become President of the United States, it's worth pointing out that she was the "people's choice".

And her choice to wear white to the Inauguration references that, as well as her support of women, women's rights, and the strength of women. She is the strongest person in the crowd today, and her white ensemble is a huge reminder to keep fighting, no matter what.