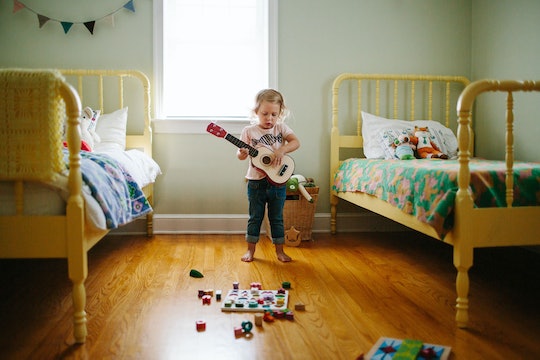 Resolve To Dial Back The Stuff You Give Your Kids In 2019? Here's How You Do It

I am not the world’s most creative gift giver, but I generally enjoy buying things for my children, especially if it’s something I know they need or really want. I like surprising them and watching their faces when they open a gift they’re excited about. What I don’t like is giving in to their every whim or using shopping as a way to pass time with them. The potentially endless spending of birthdays, holidays and the endless stuff that accumulates around kids gives me great anxiety, so I have had to find my middle ground: a way to provide and not deprive, to indulge and not deny, basically to adhere to a budget of both dollars and common sense.

It is not an exact science, of course, but it’s something I work at diligently lest I overcompensate for my own feelings of deprivation that I still hang onto from my childhood by spoiling my kids with stuff they neither want nor need, or go to the other extreme and revert to my mother’s tactics, only buying things I have a coupon for or that are on clearance and seem like a deal I can’t pass up, regardless of whether anyone actually wants them.

The best gift I ever got as a kid was a box of 64 Crayola crayons. It had a sharpener in the back and was full of strange colors like aquamarine, turquoise, burnt sienna, and raw umber. I’d really, really wanted my own new box of crayons, but my mother was strictly a Salvation Army and closeout store shopper; even my holiday gifts were used or irregular. I’d always found that profoundly disappointing; I was never able to summon gratitude for the random things my mother brought home from “the store” as she always called it. Was she trying to hide from me that her purchases always came from a thrift shop or the cheapie liquidators over on Queens Boulevard? I didn’t think so, but it enraged me even as a kid that she couldn’t just come out and say it, and I resented the birthday presents of irregular tights or a used Barbie doll with scuffs on her face or a ratty dress. I wanted to have new things, toys in boxes, clothes with tags that were my size, bought because I needed them or wanted them and not because someone else had cast them off or some company made something by mistake. So this box of crayons, wrapped and presented to me one night of Hanukkah when I was about 6 years old, meant so much to me. It was more than a box of crayons, it was a world of possibility.

I hoped it was also the beginning of a new shopping trend, but it wasn’t. My new crayons were a fluke, and the next night of Hanukkah brought a wrinkled sweater that was cute but smelled of another person. Still, I loved those crayons. I loved being the first person to open the box. I ran my fingers along the points of the crayons. I inhaled their waxy, unmistakable smell. I sorted them by color, then by alphabetical order. I memorized the weird color names and lined the similar ones up side by side, squinting to see how their shades differed, and I sharpened them gently so as not to break the points as I used them. I want my children’s gifts to be like this box of crayons. I want them to appreciate our gifts and the time and money and thought that went into them. I want them to need them, to savor them. This is virtually impossible nowadays, but nevertheless, I go to great lengths to handle kid shopping reasonably, always chasing the ghost of my beloved Crayola 64.

If there’s one thing that drives me truly crazy, it’s when my kids go into consumerist mode and beg for things I know they really neither want nor need. They know I am generally willing to buy them things, but that shopping is not a hobby for us or a thing we do when we have nothing else to do, so when they get overexcited about something they simply must have and start begging and whining, I almost always tell them the same thing: “Yes, you can totally have it! Just not now. Add it to the list!”

Add it to the list is a more or less meaningless directive but it seems to do the trick most of the time. What I want to be saying is that I’ll happily get it for them for some upcoming reason, not just for the sake of buying them something. What I am actually saying is “I hear you. I know you want this thing desperately. And I’m not buying it now because I know you will almost surely forget about it as soon as you walk away from it, but if I tell you that I will buy it later if you still want it, you will walk away from it without as much of a fight as you would if I’d just said no outright.” Works almost every time. And then they walk away and instantly forget the item. But I add it to a list that I keep all year long, and if it comes up again, it goes into some online cart or other and then they are shocked and amazed when it turns up as a holiday gift. “How did you know I really wanted this, Mama?” they have asked in shocked surprise many a time. They have completely forgotten that I said no to this thing at some point. Mama is like an elephant. I never forget.

Letting Them Each Pick One Thing

The in-person shopping though. It makes me crazy. To keep it in check, I’ve developed a few tactics. Stores like Target are dangerous and my singular exception to the add it to the list rule. First, if I go there, I try to go without the kids, but if that’s unavoidable, I manage the unavoidable gimmegimmes and buymebuymes by telling them they can each pick one thing. I don’t care what it is. Just one thing. So when they start whining but mamaaaah, hoping I will forget my own rule and let them get a second or even third thing, I stand my ground and put the decision back on them. You get to pick one thing, I say. You can totally have this thing, but then you have to put back that other thing. It’s up to you! It’s a real dilemma for them, and it’s almost fun to watch them work out a decision.

Another way I manage the endless shopping and consuming is that we stopped throwing birthday parties for our kids. We did it dutifully for five or six years but the expense of the party never added up to me: the space, the food, the siblings you end up having to extra pay for in order for the friends to be able to come, the second party you have to throw just for family, and a big garbage bag full of well-intentioned but useless presents consisting of more stuffed animals we don’t need, packaged kits we’ll never use like the build-your-own-potato-clock we got three of one year, beaded necklaces and bracelets that get lost the moment they are unwrapped, and the like. To me it’s not even so much the money, it’s the wasted stuff. I secretly threw away the ceramics they brought home from their paint-a-pot parties while they weren’t looking, and, unable to pawn off any leftovers to guests, half the cake and all the junk food went in the trash so that we wouldn’t eat it ourselves. Presents were ripped open, tried on and discarded and thus could not be regifted; the hours I insisted they spend on tracking who gave them what and writing individualized thank you notes were exhausting and tearful. No more parties! We decided we would spring for a quality birthday experience instead: tickets for the whole family to a Broadway show, a daylong event or activity at a theme park or museum or local farm with a friend or two, enrollment in an art class or a swim class. And we give one birthday gift. A big gift perhaps, like a bike, an easel, a kitchen set, or new rollerblades, but one gift, and one they need and will use.

Useful Gifts Come Throughout The Year

Sprinkled throughout the year between birthdays and end of year are other little gift-giving moments. Now that they are of tooth-losing age, the Tooth Fairy brings a tiny gift — usually a few dollars and a new toothbrush. The Switch Witch does her darndest to make all the Halloween crap disappear, replacing their sugary loot with one small item for each girl, like a new Groovy Girl doll or a costume for dress-up. Hanukkah is still rooted in boxes of 64 Crayola crayons for me, so for each night the girls light the candles and get one matching gift. Hanukkah gifts are relatively small and part fun, part utilitarian: lots of art supplies like crayons, oil pastels, blank sketchbooks, and new hats, scarves, gloves, rain boots. Always a matching pair of pajamas.

Then there is Christmas. I have a system for that, too. The gifts are in part utilitarian: this year there are snow pants and monogrammed sleeping bags, clothing, more art supplies they need. They are in part educational and entertaining: piles of books, a subscription to a monthly STEAM activity box, puzzles, a board game. They are experiential: a book of coupons good for one mani-pedi with Mama, a day at their favorite museum, tickets to a movie of their choice, a family outing to here or there. Then I get out the list for the fun stuff: plastic things, noisy things, light up things, cheap and meaningless things that I know will break or get lost. And finally, I fill small stocking with smelly pencils, bath bombs, and the same kind of junk I just got rid of after Halloween two months earlier: a handful of Laffy Taffy candies, some peanut butter cups, a pack or two of bubble gum.

All of this probably sounds like a lot but it really isn’t. If you believe it’s a lot, you are just like my kids and my tactics work on you too! The real secret is that they don’t actually get much else all year long, but because when I tell them to just add it to the list, they think I am saying yes even when I am really saying no. They don’t even seem to notice. Which makes every gift they do notice have greater value, kind of like my box of 64 Crayola crayons.