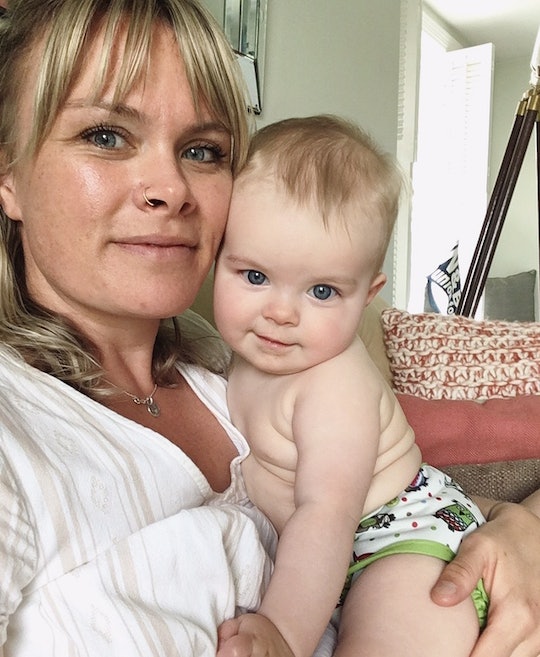 How I Made My Peace With Being “Just” A Mom

I had wanted to be a mom for a lifetime. In September of last year, my daughter, Melby, was born, and so was I, in a sense — a brand new, freshly minted mama. After three decades of dreaming of motherhood, though, finding a way to feel OK about being “just” a mom was much harder than I'd anticipated.

I had decided to stay home with Melby indefinitely. Even though my previous job as a preschool teacher was not high on the list of impressive careers with which to introduce myself at parties, I loved my job. I thrived off of the structure, the socialization with other like-minded people, the chance to help children develop vital social and emotional skills, and even the paltry paycheck.

A few weeks into motherhood, having barely left the house, let alone strayed from the short route between the couch and the toilet, I was deep in a haze of postpartum depression. I could only ask myself again and again if a mother was "all" I was. It felt too ambiguous, too totally free from structure. It didn't start or end. It didn't come with bi-yearly reviews or bonuses or appreciation days. There was no point at which I clocked out and grabbed a drink with friends in more comfortable shoes. As far as I could tell, it was just an endless stream of time during which a small screaming person was either attached to my boobs or some alternate part of my body. When my husband went back to work as a pilot after the first week, I called him hysterical on the phone, confessing to him that I'd made a horrible mistake. I should have never had a baby.

Nine months later, I don't feel that way at all. I am no longer depressed, no longer feel blurry about time or the space between my daughter's body and my own, no longer struggle to identify as a mother. In fact, quite the opposite. I love being a mama.

Melby and I have fallen into a rhythm. We wake up at the same time each day; we begin with nursing — for her, breastmilk, and for me, some coffee we make while she babbles happily on the countertop. We make meals together and do dishes and yoga together. The days are not concretely scheduled like before, but we have a certain cadence. Days of library visits and music class, coffee dates and grocery shopping, park swings and long walks, punctuated by two very consistent naps at 9 a.m. and 2 p.m. It's melodic almost — a buzzing stretch of playing and food and chores and laughter or tears with quiet moments built in. We seem to have it quite figured out.

I ran into a woman I know only peripherally and hadn't seen in years; she asked how I'd been, what I'd been up to. I fumbled with my words. 'I just had a baby. Well, not just... she's nine months. It feels like "just." I'm staying home.'

It is certainly not for everyone, but for me, "stay-at-home mom" is now a proud title. I've embraced it heartily. I go to mom's groups. I even started a less conventional one of my own. I write about being a mom. I draw cartoons about being a mom. I've made friends with other new moms. I have read every positive discipline, sleep, and baby food book. I am momming hard.

The other day, however, I realized maybe the pendulum has swung too far in the other direction. I went on a rare outing entirely by myself — not the infrequent date night with my husband or a yoga class with a friend; it was just me, alone — a unicorn of an event these days. I ran into a woman I know only peripherally and hadn't seen in years; she asked how I'd been, what I'd been up to. I fumbled with my words. "I just had a baby. Well, not just... she's nine months. It feels like 'just.' I'm staying home. She's with my husband."

Melby was the only thing I could think to say about myself. Suddenly I felt like I was using it as a defense. A thing to say in place of things to say.

Certainly motherhood is consuming. It consumes your body, your time, your sleep, your energy. I don't take issue with that. What did alarm me was my feeling of painfully vulnerable without my daughter strapped to my chest, my feeling that I had nothing, was nothing, without her.

Where did the woman who birthed her go? Was she still there as an individual? Was, I asked myself again, this time with much different context, a mother "all" I was? Which really begs the bigger, maybe way too existential question, how do we define ourselves? What makes us valuable?

If I'd known leaving the house alone would throw me into a total crisis of self, I maybe would have chosen to stay home. And yet, it seemed important. This awkward interaction felt like a moment of reckoning for me.

I am a mom. I was also not a mom for 33 years and an entire person existed before then. Surely she is forever changed in many ways, but she's also still there. Who is she?

I had to dig deep. This wasn't about getting a job, so I could call myself something other than a mom, because, really, that's just another version of the same problem — the problem of viewing myself so singularly, so definitively. It was about flushing out who I am both in context with other people, including my daughter, but also without.

It was awkward at first. It felt hard and unproductive.

I decided to set aside time during her naps, time usually spent as quickly as possible prepping food, doing laundry, and cleaning the neverending messes. I wouldn't furiously maintain the house, just stringing together time between acting as mom with roles that feed into being a mom; I would just be something all my own for a minute.

It was awkward at first. It felt hard and unproductive. Then I remembered I like to read. I read a book — a whole book, not even about parenting! One day I sat in the sun and read a magazine, like I was 17. I optimistically started writing a book. I drew some cartoons. I did some yoga. I tried new recipes (OK, fine. This is housework, but I did it in a girlfriends-cooking-together-while-drinking-wine kind of way and not a chore-to-crank-out, dreary kind of way). I listened to podcasts. I joined a health challenge that focused not just on food and exercise, but also mental health. I called my senators about my feelings on current political issues. I read the news. I watched all of Game of Thrones. I wrote some real snail mail. I did a face mask. Sometimes, I just turned on music and danced like actual no one was watching.

None of those things, in themselves, is a whole identity. Most of them are barely even worth mentioning. Next time I run into someone without my daughter and they ask what I've been up to, I'm not going to scream, "I did a face mask!" (Or I hope not. Sometimes there's really no saying.) But each little bit, cobbled together, helped me remember, even being a mother, in itself, is not a whole identity. I am not one label or another — even if it were an impressive label. I remembered that who I am is a person, who likes learning and moving, who thrives on connection and personal growth, who is constantly creative, who likes to be outside, who finds most clear expression through the written word, who worries and plans, who has trouble slowing down, who loves to explore.

We want some clear label. Some simple phrase we can utter that's easily understood, that inspires respect and admiration. At first motherhood didn't seem like enough to me, then I absorbed it so deeply that it became almost too much. Taking a step back reminded me that I have interests and skills outside of being a mom. And that, in turn, makes me a better mom. That makes me a more complex, more engaged, more dynamic and fulfilled woman, not just someone filling a role, but a role model for my daughter.

I'm not sure I'll say anything different next time someone asks what I've been up to. I'll probably still say I have a baby. I'm a mom. It's a pretty big deal. Plus it's just how we communicate. We choose the thing that absorbs the majority of our time, distill it down to a single word or two, and blurt it out as if to suggest some greater meaning about who and how we are. I am a mom. But more than anything, I hope there's some ease in the words next time, that it feels less frantic, less desperate. I hope I can say it with some ownership, knowing that, being a mom means raising my child with my all my energy and being, but also making space to be a pretty cool and interesting person, too.