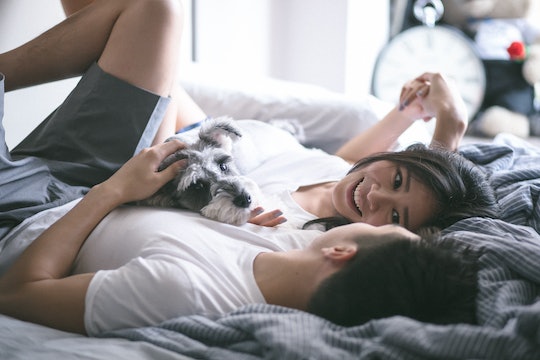 Is Sex Actually *That* Important In A Marriage? Experts Weigh In

Marriages are a living thing. They grow and change the longer they're alive. It's only natural, as the people in a marriage grow and change. I know that, for me, sex is a non-negotiable in my marriage as it provides a sense of connection with my husband beyond our close friendship. That might not be the case in your marriage, and that might be OK — or your marriage might be suffering from the lack. Just how important is sex in a marriage?

If it's important to one party, it needs to be important to both parties. It's not something that can be ignored without someone, possibly both partners, becoming understandably frustrated and upset. Dr. David Ley, author of Insatiable Wives: Women Who Stray and the Men Who Love Them, tells Romper, "I take the tact that it's incredibly important for people in a marriage to have shared sexual values, levels of desire, or the ability to negotiate this within the relationship. Things are fine when both partners have similar sexual interests and the frequency of sex meets both their desire, but, when that changes, or there's a discrepancy, most couples don't know how to negotiate or manage it."

If you and your spouse have different views of sex and how it relates to marriage, it matters. This can definitely bleed into other areas of your life if you feel unfulfilled or even unwanted by your partner. It's gutting to your self esteem and difficult to recover from. Intimacy in marriage is an essential piece of the union, but that's not always defined as intercourse. However, if you feel that sex equates intimacy, then it's a reasonable argument that a marriage without the act is undesirable at best. I spoke to both Ley and Dr. Siri Greenblatt, therapist and rabbi who specializes in counseling couples about sex before marriage, to get their opinion on the subject of sex in marriage. The are two vastly different therapists, but gave very similar messages — if not in the same language.

According to Ley, there are road blocks in every marriage, even disagreements about sex, and they're impossible to avoid. Unlike your husband discarding his socks in the living room, feeling unfulfilled sexually has vastly different meanings for people than the quotidian chores of living with another person.

He notes that sexuality, proclivities, and desires need to be discussed as much out of the bedroom as in it, because when you're aroused, your perceptions change, and you're not thinking as clearly as you typically would. You can't discuss things like relationship boundaries and needs in the heat of the moment. You need to be able to come to an accord outside of the bedroom that's agreeable to both parties.

Greenblatt tells Romper that while she's found that couples who are more intimate or sexually active tend to be, on the whole, more fulfilled in all areas of their life, "that's not just limited to sex. It can be touching, holding each other, showering together, and making your needs as a unit the foundation for your marriage." She says that beyond the physical benefits of sexual intercourse — which are many and documented — it feeds your marriage. "It is a blessing to be able to come together as a couple in a way you wouldn't with any other person. That is a shared vitality between you and your partner alone, and it is sacred. I know that my wife and I aren't always in the mood to go all the way — we have kids and jobs and get tired like everyone else — but we make time for ourselves to be alone in our intimate space at least a few times a week to reconnect as a couple."

So exactly how important is sex in a marriage? "It's as much about individual needs as it is about being a couple. As long as you're both content and have a strong, intimate bond, you're doing it right," Greenblatt says.

A friend of mine and I have often discussed between us just how important sex is in our marriages. She's an attorney and her job is extremely demanding and so is her husband's. I'm a writer and perpetual student who often feels a bit like a hermit spending her life tucked away in a vast library only to exit dusty and undesirable. But my husband doesn't make me feel like that. It's our sex life that keeps me feeling connected to him. She jokes that her prescription for a happy marriage is just "have a lot of sex," and I can't say I disagree. However, what that means is between you and your spouse — no one else can define that for you.