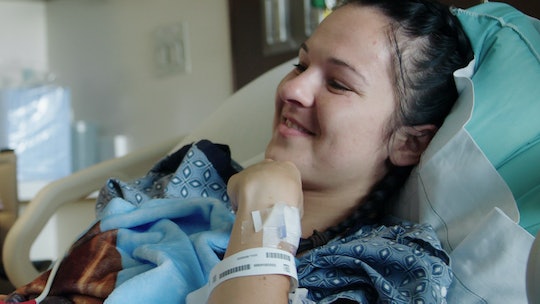 Angel's Story On 'Diagnosis' Will Warm Your Heart In Unimaginable Ways

On Aug. 16, Netflix teamed up with The New York Times to deliver Diagnosis, a docuseries created to show the power of crowdsourcing in the medical space. Throughout the course of seven episodes, Dr. Lisa Sanders introduced audiences to patients seeking resolve for their mysterious illnesses, including Angel Parker, the 23-year-old suffering from episodes of muscle pain. Of course, fans of the series might be looking for an update on the patient since the show has wrapped. So how is Angel from Diagnosis now? It looks like this case has a happy ending and an extraordinary new beginning.

When Dr. Sanders first posted Angel's story on The New York Times website in April 2018, it was revealed the Las Vegas native has displayed symptoms since she was 14. "I have excruciating pain on a daily basis to where they don't know why," Angel said of the past nine years. "It begins in my legs and it shoots up my back, all the way to my jaw. They say my muscles are leaking protein into my blood. My kidneys aren't filtrating right, so it catches all the bacteria and just holds onto it. When I go to the restroom, my urine is black."

Angel also explained doctors didn't know how to stop her conditions from affecting her vital organs, much less understand how to help her pain. A few weeks after Angel's story was added to the "Diagnosis" column, over 1,600 suggestions came in, which led to an official diagnosis. Following a series of genetic tests shown in the Diagnosis episode titled "Detective Work," Angel learned she has carnitine palmitoyltransferase deficiency II, known as CPT2.

Prior to her diagnosis on the Netflix series, New York Times reported an update on Angel's life. The publication revealed Angel received her nursing pin from Altierus College, earned her nursing license, and started working at Montevista Hospital in Las Vegas. Now, with her CPT2 diagnosis, Angel can live out her nursing career without pain so long as she manages the amount of sugar and fatty acids she consumes in her diet.

"It's so exciting that she finally has a name for what's been killing her for the past nine years and to know that these episodes of terrible pain can be fixed just by changing the way she eats," Dr. Sanders said in the episode.

Meanwhile, Netflix docuseries shared how Angel is doing after cameras stopped rolling. "In the months since filming, Angel has made significant adjustments to her diet and is experiencing far less pain day to day," the streaming service stated. "She now works full time as a nurse."

For now, it seems Angel is living her life as ordinarily as possible — other than major adjustments to her diet. She is active on social media and even gave Diagnosis a shoutout on her Instagram page.

"What an amazing journey this all has been & I’m truly so grateful," Angel wrote on Instagram. "Tomorrow on Netflix, Diagnosis will be releasing & my story will be told in such a beautiful way. I wouldn’t be where I am today if it wasn’t for the support from you all throughout all these years, so thank you from the bottom of my heart. My life will be forever changed."