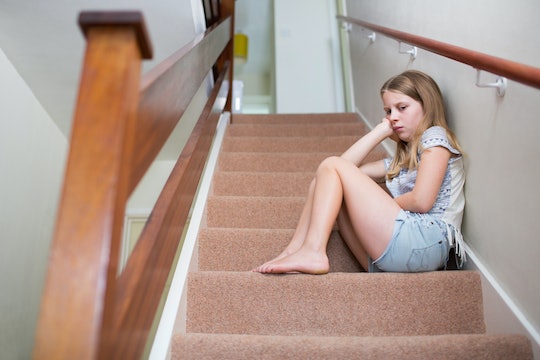 Here's How Sensory Processing Disorder Is Different From Autism

Your child hates loud noises, is very sensitive to certain food textures, and doesn't transition from one activity to another very well. Your thoughts immediately turn to autism, and you start wondering if your child is on the spectrum. But instead, they are diagnosed with sensory processing disorder, a condition that causes your child's brain to have difficulties receiving and responding to information from their senses. Sounds similar to autism, right? So how is sensory processing disorder different from autism?

According to the STAR Institute for Sensory Processing Disorder, the connection between autism and sensory processing disorder, or SPD, is because of a subtype of SPD. Some children who are diagnosed with SPD require a lot of stimulation in order to become alert and active, which is often a behavior that children on the autism spectrum display.

But that doesn't mean that any child with SPD is also diagnosed with autism. According to the National Autism Association, someone with autism can exhibit a wide variety of symptoms such as being non-verbal or delayed in speech, obsessive interests, low to no social skills, avoiding eye contact, unusual eating and sleeping habits, meltdowns, and unusual mood or emotional reactions.

Those last few symptoms seem to be what people use to connect SPD with autism, as the meltdowns and unusual eating habits, mood, or emotional reactions are often seen in children with SPD. The STAR Institute for Sensory Processing Disorder noted that at least three quarters of children with autism spectrum disorders have pretty significant symptoms of SPD, but the opposite isn't true — most children with SPD do not have a form of autism.

The important thing to remember when noting the difference between SPD and autism is that SPD is a disorder that affects how the nervous system receives messages from the senses, according to The STAR Institute. Instead of reacting in an appropriate behavior, the brain doesn't know how to process the message, which can lead to an overreaction or, in some cases, an under-reaction. The Centers for Disease Control and Prevention noted that autism spectrum disorder is a developmental disability and can cause major social, communication, and behavioral challenges. In short, Psychology Today noted that a child can experience a sensory processing disorder without showing any diagnostic signs of autism.

According to Integrated Listening Systems, it's taking time for sensory processing disorder to be seen as a completely standalone disorder. Before research was done, SPD was often thought to just be associated with autism. Although there are a lot of similarities, the University of California San Francisco conducted research that found measurable brain differences between children with autism and children with SPD. In specific sensory regions of the brain, kids with sensory processing disorder had decreased structural brain connectivity that was different than those who had autism. Children with autism showed brain differences in the areas related to facial emotion and memory.

With more research discovering the differences between the two, it opens the door for appropriate treatment so that children with sensory processing disorder are not misdiagnosed or misunderstood by their therapists and teachers. If your child has been diagnosed with SPD, that doesn't mean they have autism, but if your child is on the spectrum, they most likely have some sensory processing issues.