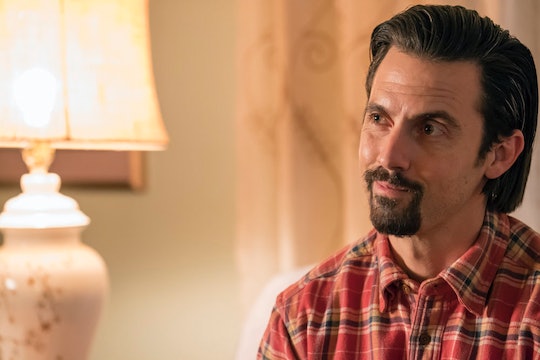 Jack's Death Finally Happened On 'This Is Us' & It Broke Twitter

Any This Is Us fan worth their salt knew that the reveal of Jack Pearson's death was inevitable. But that didn't make viewers any less devastated when the tragedy was shown firsthand during Sunday night's special Super Bowl episode. How Jack died was revealed on This Is Us and — much like myself — the collective internet (namely twitter) couldn't deal with the devastating loss.

Throughout the past two seasons, the writers have provided hints about how Jack died. Some were subtle — like the faulty washing machine and suspiciously busted fuse. Others were not so subtle — such as the scene of the Pearson family home burnt to a crisp. Then it was revealed that a faulty, old slow-cooker was the thing responsible for setting the house ablaze. But that still left a few factors up in the air. Was it really the house fire that took Jack's life? Did he go back into the fire in order to save someone? Was it Kate's dog and that's why dogs are a sensitive subject for her? Did Jack go back in thinking Kevin came home when actually he was staying the night at Sophie's? That would be a very Jack thing to do. Or was it none of the above and the whole fire plot was simply a catalyst of the real cause of his demise?

These were all things that viewers were desperate to know, though now that it's happened, I'm having serious curiosity regrets, and I'm not the only one.

Though he survived the fire itself, the episode revealed that Jack went into cardiac arrest due to all of the smoke he inhaled earlier that evening. Rebecca was all of us in thinking that the doctor had to be mistaken. Surely Jack couldn't be dead, not when she was just with him only moments ago in his hospital room. She was making a few phone calls to book hotel rooms for all of them and to check to see if Kate had been able to get ahold of Kevin yet (she hadn't). Little did she know that behind her doctors were running into Jack's room trying desperately to save him.

He died all alone after being such a hero. It's a heartbreaking revelation even though we all knew it was coming. But I'm pretty sure that this episode may have officially broken Twitter because emotional devastation doesn't even begin to cover how we're all collectively feeling. Don't believe me? The tweets speak for themselves.

Finding out how Jack died was never going to be easy. But even though you know something devastating is coming doesn't make it any easier to deal with. Jack proved himself to be the best man, best father, best husband, and best friend anyone could've ever asked for, so to see him die was beyond heartbreaking and completely unfair. But never fear, because even though we now know what kills him, the show is nowhere close to being done with this character. Milo Ventimiglia isn't leaving This Is Us, so we can all at least take comfort in that. This is a show known for its flashbacks, so Jack will be appearing on our screens in the weeks and years to come.

There was never going to be an easy way to say goodbye to this beloved character, but I'm happy to know that he didn't burn to death in a fire or part with his kids on bad terms. They know how much he loved them and he was a man they've all continued to love and look up to in the many years following his death. And really, that could be the greatest gift they could've given him. RIP Jack. Never change.