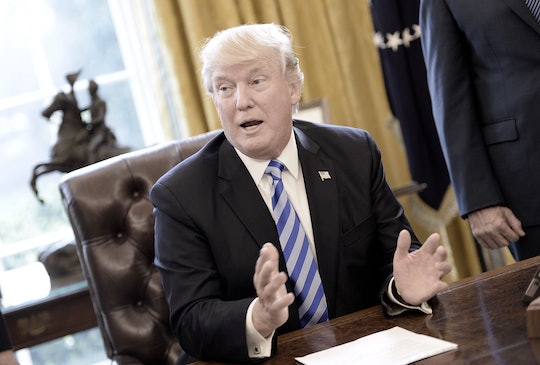 The Trump administration announced its proposed budget last Thursday, and several integral programs found their budgets on the chopping block. One of the programs that saw the most serious proposed cuts was the Environmental Protection Agency. Director of the White House Office Management and Budget Mick Mulvaney was incredibly cavalier about the proposed 30 percent cuts, telling reporters that President Trump thinks the EPA is "overreaching", according to The Washington Post. But what do Trump's EPA budget cuts mean for kids? The implications of a drastically reduced EPA could spell disaster for the future of clean water efforts.

The proposed budget, dubbed "America First: A Blueprint To Make America Great Again," (proof that a tagline like that won't ever go away, I guess) would see massive spending funneled into the defense department and Homeland Security. And where would that money come from? If the proposed budget is passed, much of those funds would come directly from the EPA; Mulvaney announced on Thursday that the new plan would drain a full 31 percent of the EPA's budget. It would take the agency's yearly budget from $8.1 billion to $5.7 billion and cut 3,200 positions. According to CNBC, Mulvaney told reporters that the Trump administration considered spending dollars on climate change efforts a "waste of money."

I think the president is fairly straightforward. We're not spending money on that.

These proposed budget cuts would also see the end of more than 50 EPA programs that were designed specifically to combat climate change. One such program sure to be on the chopping block would be the Obama-era Clean Power Plan, "a historic and important step in reducing carbon pollution from power plants that takes real action on climate change." according to the EPA website. Which is terrible news for kids, considering the World Health Organization, a polluted environment kills 1.7 million children each year. Dr. Margaret Chan, the director of the WHO, said in a statement that children are especially vulnerable to pollution as reported by CNN:

A polluted environment is a deadly one -- particularly for young children. Their developing organs and immune systems, and smaller bodies and airways, make them especially vulnerable to dirty air and water.

While Mulvaney did specify that certain funding would be maintained for "high priority" programs, including municipal wastewater management and clean drinking water projects, the future of clean drinking water for children in the U.S. remains unpredictable. Rather than relying on a federal safeguard system, this new budget would force the EPA to pass much of the responsibility of clean air and water to local officials. Small government agencies often already stretched thin with other needs and priorities themselves. If this new budget is passed, how long will it really be before we see another Flint water crisis happen under the Trump administration?

As John O'Grady, union representative for EPA employees, pointed out to KTLA:

It is a sad day when a group of millionaires and billionaires in Washington can decide what’s best for America’s health and environment. How can this administration tell America that we will have clean air and clean water with a 25 percent reduction in US EPA’s budget?