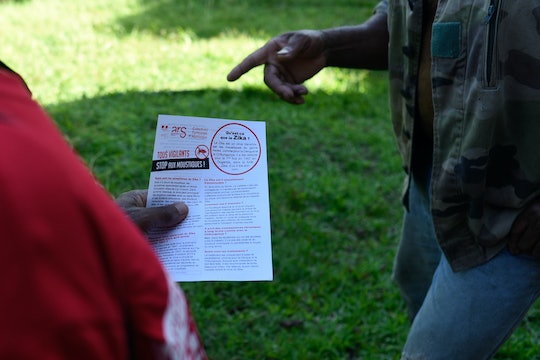 How Likely Is It That You'll Get Zika Virus In A Zika Zone? It's Still Spreading

For a little while, the best way to avoid contracting the Zika virus seemed to be just staying out of Brazil, which for many people is not that big of a challenge (Olympic athletes aside). But the virus has now spread to more than 30 countries in Central and South America, the Pacific Islands, Mexico, and the Caribbean. That's a lot of places to avoid. Now travelers are wondering how likely it is someone could contract Zika virus in a Zika zone, and, unfortunately, there's no good answer.

For those who manage to stay out of affected areas, avoiding Zika is pretty simple; don't have unprotected sex with a potentially infected partner, which is someone who has recently traveled to a Zika-affected country. Ideally, this is something that one should be practicing anyway, as Zika virus is certainly not the only risk of unprotected sex. But those in the Zika zone must take additional precautions, because experts don't even know how prevalent Zika virus really is. Only one in five infected patients ever have any symptoms, and, of those who do, common symptoms include fever, rash, joint pain, conjunctivitis, muscle pain and headache – all of which could easily be attributed to other conditions. When less than 20 percent of patients ever even know they have a disease, it can make it pretty hard to track.

While avoiding the areas where Zika is currently being transmitted remains the best way to prevent infection, that's obviously not an option for everyone. But it's important to remember that, for the majority of infected people, Zika actually isn't that big of a deal. The Brazil Ministry of Health has reported an increased number of people developing Guillain-Barré syndrome after being infected with Zika, but GBS is still very, very rare, and Zika hasn't been conclusively tied to it as of yet. Zika is also possibly to blame for Brazil's increase in babies born with microcephaly (though it's now thought that the link, and the epidemic, may have been overstated), but if a traveler (or their partner) isn't pregnant or planning on becoming pregnant, that's moot, too.

Still, nobody wants muscle pain and conjunctivitis, and infected people can also spread the virus if they're bitten by another mosquito who then goes on to bite an uninfected person, so it's a good idea to avoid Zika no mater what. The Centers for Disease Control and Prevention recommend wearing long-sleeved shirts and pants and using insect repellents. Clothing can also be treated with permethrin, which is available at sporting goods stores (or Amazon, of course). As far as environmental protection goes, standing water should be eliminated, and travelers should stay in places with air conditioning, or at least window screens and bed nets to keep mosquitos out. And, for those who are planning on attending the Olympic Games this August, take heart: the Brazilian government is currently fumigating the entire city of Rio (and presumably crossing its fingers).