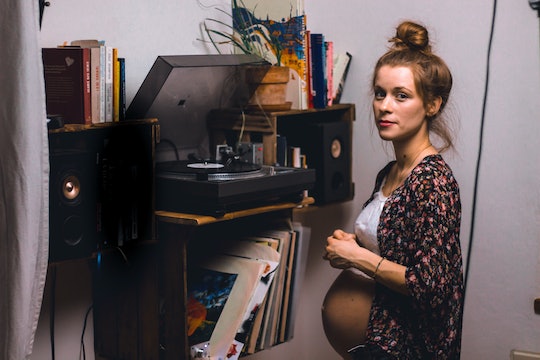 Put on some tunes, this could take a minute. Fotolia

How Likely Are You to Deliver On Your *Actual* Due Date?

When my mom-friends and I compare birth stories, our experiences are as interesting and varied as our children themselves. Some moms I know went into labor on or close to their due dates, while others saw that target date come and go... and go... and go. Some babies arrived sooner than anticipated; others came into the world via a long-planned c-section. Me? My two were very close to their anticipated dates, but one had to be induced for health reasons (mine), and the second was delivered surgically after many attempts to get her out of the breech position she decided was just too comfy to give up.

One of the first things a mom-to-be does after seeing the "pregnant" sign on the test is hurry to the computer or phone and plug in the significant conception (or IVF transfer) date information on a due date calculator that estimates when the baby will be born. From then, we tend to treat that one date as a set-in-stone certainty, announcing it to family and friends and alerting employers that a maternity leave is on its way.

But just how accurate is that due date? Turns out, not very.

As registered nurse Jeanne Faulkner explained to Fit Pregnancy, a due date is actually calculated from the first day of your last period. If you know that date, then the baby should arrive around 40 weeks (280 days) later. At the first ultrasound, your OB can measure the size of the baby and get a better idea of how far along you are; that may change the due date by a few days or even weeks.

Just one problem: The one variable not even the best doctor or best-prepared mom can plan for is the baby itself. In fact, the Boston Globe recently reported on a large-scale study conducted by Matt Chingos, a Brookings Institute researcher who also serves as co-creator of the WhentoExpect.com pregnancy calculator site. He found that on average, babies arrived seven days prior to their due dates, with boys and girls equally likely to come early. First babies were more likely to be born two or three days before the due date, with subsequent babies coming sooner. The spread of arrival dates is a big bell curve.

WebMD confirms that only about 5 percent of babies arrive precisely on their due date. Interestingly, the website Spacefem conducted an unscientific survey of more than 14,000 mothers and got similar results: again, 5 percent of moms reported welcoming their little ones at the exact 40-week mark.

Chingos's research found that age may play a part: Women over 30 were much more likely than teenage moms to give birth a week before their due dates, perhaps because the older moms in the study may have been having their second or third babies.

Family history may determine your baby's arrival date, as well. A recent long-term study published in the American Journal of Perinatology found that women whose mothers had delivered prematurely (prior to 37 weeks) with any of their pregnancies had a significantly higher risk of premature birth themselves, regardless of their age or race. Surprisingly, women with aunts who delivered prematurely were also 30 percent more likely to have preterm births.

Faulkner, the obstetrical nurse, admitted to Fit Pregnancy her concern that too many moms pin their hopes around that all-important date, which can lead to disappointment or anxiety if the baby doesn't arrive when it "should." That anxiety has led many women to ask for inductions before the 40th week even when it's not medically necessary — a procedure that has stirred controversy for years. Although recent research indicates that induction at or after 39 weeks can reduce the need for a C-section, a large-scale National Institutes of Health study showed that early- or near-term births (defined as babies born between 37 and 39 weeks gestation) are more likely to die within their first year as babies born full-term, though infant mortality rates improved for early and full-term births from 1995 to 2006 (black infants had the highest mortality rates at 0.55 percent).

Every mom-to-be has to do what's best for her particular situation (and after consulting with her doctor), but knowing that it's normal for labor to start much earlier or later than the date circled on your calendar may help ease your mind. Your baby may end up being a late-September Libra instead of the early-September Virgo you were expecting (or vice versa!), but as long as you and your little one are healthy, isn't that what really counts?