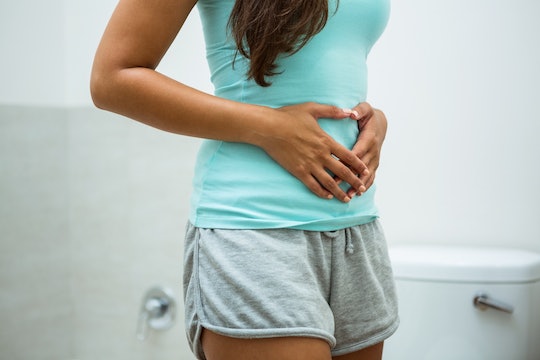 Here's When You Can Expect Implantation Bleeding After Conception

Three days after I found out I was pregnant with my daughter, I noticed spotting in my underwear. An hour later, the cramps started. I knew enough about implantation bleeding that I tried to reassure myself it was nothing to be worried about, but it didn't stop me from wondering anyway: how long after conception does implantation bleeding occur? It was a weekend, so I called my doctor first thing Monday morning and, several tests — and way too many long hours later — discovered that everything was just fine. But I discovered that I wasn't alone in wondering about the ins and outs of the implantation process.

"Typically implantation occurs about one week after ovulation and conception," Dr. Sheeva Talebian, co-founder of Truly-MD.com and director of third party reproduction at the New York branch of the Colorado Center for Reproductive Medicine, tells Romper in an email interview. "Some women report some cramping and even light spotting during this time. [But] the presence or lack of these symptoms are neither reassuring nor negative."

Dr. Allison Hill, a board-certified OB-GYN and author of Your Pregnancy, Your Way, explains to Romper that when implantation occurs, the pregnancy is attaching to the uterine wall and hundreds of delicate new blood vessels are formed. "Sometimes, these vessels break and bleed, causing the blood to accumulate between the sac and the uterus," she says in an email interview. "Eventually, the blood is reabsorbed into the body, but some of it makes its way out through the vagina."

Dr. Janet Choi, a reproductive endocrinologist and the medical director with the Colorado Center for Reproductive Medicine in New York, points out however, that it can be tough to tell the difference between implantation bleeding and PMS. That's because while the spotting and staining of implantation bleeding can be associated with the fertilized egg starting to implant in the wall of the uterus, it can also be the time a woman would expect her period. "It can sometimes be tricky to distinguish between the two causes of bleeding," she tells Romper in an email interview.

According to Parents, 25 to 40 percent of women will experience some level of bleeding during their pregnancy. A few things to keep in mind: Implantation bleeding is light and stays light, whereas your visit from Aunt Flo will start light and grow heavier until it tapers again, noted Parenting. Be sure to also check the color — bright red blood is most likely the result of menstruation, while discharge that appears light pink or brown often points to implantation.

Choi says if you think there’s a chance you might be pregnant but you’re spotting and/or bleeding, then do a home test to make sure. "If it’s negative but your period 'doesn’t seem right' (e.g. it’s lighter or spottier or just different than its usual pattern), then do another pregnancy test a few days later to re-confirm."

And remember: Doctors don't take any bleeding during pregnancy lightly. One thing to which you must surrender during pregnancy, is that there are no silly questions — you're growing a human. So if you notice anything going on down there, then give your healthcare provider a ring.