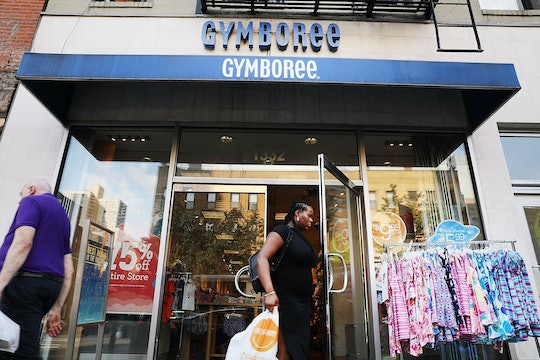 Here's What's Happening To All Of Those Gymboree GymBucks You Stockpiled

You've heard the news — Gymboree has filed for bankruptcy and will be closing all of their clothing store locations. It's a sad time for a lot of parents, especially those who have some Gymboree gift cards and rewards points to use. But how long are Gymboree bucks good, and can you still use them during the out-of-business sales?

On Jan. 16, Gymboree Group announced that they filed for bankruptcy and will close down all Gymboree and Crazy 8 store locations, according to USA Today. All hope isn't lost — you can still get sweet deals on kids' clothes from their online platform that is not intended to close down — but if you were part of their rewards program and have GymBucks still left to use, the clock has officially run out. According to their press release, "the Company has sought authorization from the Court to continue to honor customer gift cards for 30 days. Gymboree Group has discontinued its GymBucks and Gymboree Rewards programs effective immediately." So, gift cards — yes. GymBucks — nope.

Gymboree began as a mom and baby class provider in 1976 and has built a children's clothing company up from that concept, according to the company's website. But luckily, the Gymboree Play & Music is a separate business and is not expected to close. "Gymboree Play & Music, which provides play, music and art classes for parents and newborn children and kids up to 5 years old, split from Gymboree Group Inc. in 2016 and those locations will not be affected by the Gymboree Group Inc.’s bankruptcy filing and store closures," reported USA Today. (That would be the real tragedy. Cute and inexpensive clothing is one thing, but please don't take away our kid's classes.) The Gymboree Group going through the bankruptcy consists of the clothing stores Gymboree, Crazy 8, and Janie and Jack. The Janie and Jack brand is expected to stay open, as well as the Gymboree online intellectual property, but both will be bought out.

While some may be sad — because Gymboree did have some of the best deals on kids' clothes — look at this as a new beginning. If you haven't heard of Janie and Jack, they have the absolute cutest clothes for kiddos. I mean like, Pinterest-worthy outfits. And with the online intellectual property being bought and managed by a new entity, you may be getting some awesome concepts from their new owners online. Subscription boxes, anyone?

If you're interested in shopping, now is the time to do it because their liquidation sale will only last 30 days and is expected to close up all sales by Feb. 15, according to the aforementioned USA Today article. So if you have any gift cards lying around, spend them ASAP, and count your GymBucks as a loss.

It's sad to say goodbye, especially after a recent brand refresh with adorable new styles, but everyone will be on the lookout for their next move. For more information on the closing of Gymboree stores, and to get 50 percent off, check out their store website.