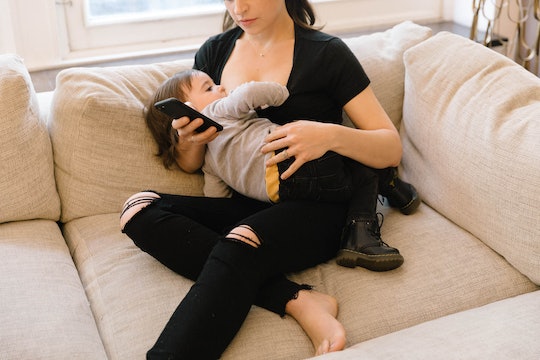 Don't Worry, Your Breastfed Baby Doesn't Have To Poop Every Day

I never gave much thought to any other creature's poop — until I had my daughter. Suddenly I was logging newborn diapers in an infant feeding diary, including detailed notes on their color and consistency. (Yes, I've considered keeping the log, and presenting it to her at her wedding, but I'm not that mean.) Babies eliminate differently from the big people, and a lot depends on how they're fed. So it makes sense to wonder, how long can a breastfed baby go without pooping?

According to ChildrensMD, newborn babies should poop after almost every feeding, because they're still getting used to their new digestive system. Pooping six times a day is great for them — they're learning, after all — but I admit, it's hard on the diaper genie. After two to three months of digestive practice, however, breastfed babies can absolutely go two whole weeks without pooping.

Sound incredible? It kind of is — it's also an outside number. Many more breastfed babies will poop once every two or three days, and some will just keep on pooping every day, forever, according to What To Expect Your First Year by Heidi Murkoff and Sharon Mazel. A poop once a week is no cause for alarm, as long as your baby pees often, continues to gain weight, and remains her usual cheerful self, La Leche League explained. So, if it's been a few days since you've seen an especially messy diaper, don't automatically assume your breastfed baby is constipated. In fact, breastfed babies are rarely constipated, noted Murkoff and Mazel, because breast milk is a natural "tummy soother." So count yourself lucky, and celebrate saving on baby wipes.

How can your adorable critter go so long without a truly dirty diaper? Consider that your breast milk is the perfect recipe of fats, proteins, and micronutrients for your baby. Once she gets the hang of the inner workings of her baby belly, she'll want to soak up every molecule — without leaving any waste behind, noted Murkoff and Mazel. Though your baby might have fewer poops, the dirty diapers she does make should be substantial.

As long as your breastfed baby's 2 months or older, it's OK if she doesn't poop as often as you'd expect. Keep in mind that every baby is an individual, and that you know your own baby's belly (and bowels) the best. So if anything concerns you about her bowel movements — or lack thereof —don't hesitate to give your pediatrician a call.