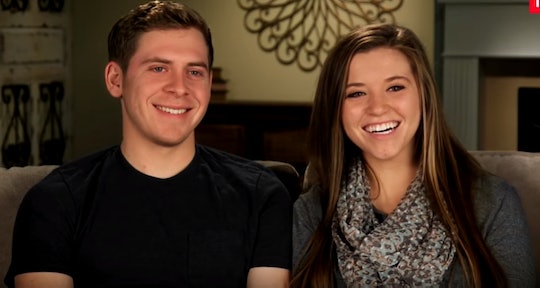 It might be hard to believe for some fans, but Joy-Anna Duggar has been married for a hot minute now. The Counting On star grew up right in front of fans' eyes as one of the younger daughters of Michelle and Jim Bob Duggar, and now here she is a wife and a mother in her own right. Could it really be that long since she first fell in love with her husband? I mean, how long did Joy-Anna Duggar and Austin Forsyth court for, even? The young pair have gone through so much together already.

I certainly don't have to explain this to tried and true Duggar fans, but for those of you who are not already familiar, the conservative family does not believe in dating, according to In Touch Weekly. Instead, patriarch Jim Bob Duggar and his wife Michelle insist their children take part in a dating ritual called courting before they are able to venture into an engagement. A courtship starts when a young man asks Jim Bob's permission to show interest in his daughter, according to TODAY. Then the couple are allowed to go on dates with a chaperone, text each other with parental supervision, and can enjoy some side hugs. As for kissing or "regular hugs," that's for after the wedding.

To provide some backstory regarding the couple's road to romance, Joy-Anna was just 19 years old when Austin Forsyth, a longtime family friend, asked for her hand in courtship at the end of 2016. The moment was captured for an episode of Counting On, and boy, did Jim Bob grill him about how he felt about Joy-Anna. I'll admit to you that maybe I didn't hate it, even though it must have been a bit nerve-wracking for Forsyth considering Jim Bob is sort of the boss of everything.

After getting questioned about his career as a house flipper, what he loves most about Joy-Anna (apparently her work ethic, her dedication to God, and her beauty topped the list), Jim Bob gave him the green light for a courtship. From there, Forsyth, whose family owns Fort Rock Family Camp & Retreat Center in Arkansas, took Joy-Anna to one of his special places for contemplation to find out if she was interested. She was indeed interested, and things moved pretty quickly following that moment.

Just four months after starting their courtship in November 2016, the couple were engaged. And they were married in May 2017, six months after they began courting. Their little boy, Gideon, made his debut in February 2018.

Sadly, the couple experienced a miscarriage in July when Joy-Anna was five months pregnant with the couple's second baby. The devastated parents shared an emotional post to social media about their loss, explaining on Instagram:

Today marks one week since we heard these words….'So this is your baby’s heart (pointing to the ultrasound screen). I don’t hear a heartbeat or see any movement.' We had gone in for our 20-week ultrasound and gender reveal. It was a baby girl.

A miscarriage is a difficult thing for anyone to go through, of course, but Austin and Joy-Anna appear resilient despite their young age. They present a united front as a team, with the two of them leaning on one another in difficult times. And it just goes to prove that a couple can develop a strong bond within a short period of time.