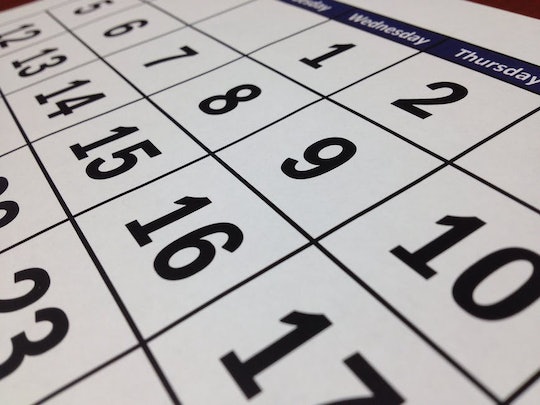 Here's When To Get Pregnant After An IUD

For a lot of women, when they're first sexually active, they're also actively trying to not get pregnant. They take measures to prevent pregnancy by using birth control ranging from condoms to hormonal contraceptives like an IUD. But as a woman's wants change, she may find that she's ready to have a baby. If you've found yourself at that point and your choice of protection was an IUD, how long do you have to wait to get pregnant after having your IUD removed?

Dr. Daniel Shapiro, chief clinical officer at Prelude Fertility, tells Romper in an email that "there is no need to wait after removal of an IUD to attempt pregnancy. The first cycle that is completely IUD-free would be the first fertile cycle."

According to Dr. Amy Peters, OB-GYN at Saddleback Memorial Medical Center in Laguna Hills, California, there are some things to consider. "Depending on if the woman has a progestin IUD, that might take a little more time to be ready to conceive," Peters says in an email with Romper. "If they have the higher-dose IUD, such as Mirena or Liletta, I suggest that they take it out three to six months prior to wanting to conceive, because their period may not start for months after removal," she adds. "Some patients, however, do ovulate within weeks of removing even the Mirena or Liletta."

Thankfully, however, an IUD shouldn't impede your chances of conceiving.

"The risk of infertility from an IUD is very, very, very, low," Shapiro notes. He suggests that the fear of infertility from an IUD comes from the Dalkon Shield, an IUD in the '60s and '70s. "The problem with [that] IUD wasn’t the IUD itself but the string, which was braided and created a ladder for bacteria to ascend into the upper reproductive tract," he says. "Modern IUDs have mono-filament plastic strings and do not increase the risk of pelvic infection to any significant degree."

IUDs are much better these days, according to Shapiro, and they have failure rates of less than one per 100 women each year. "The only risk of infertility would be if the woman had severe or unusual complications from the IUD, such as Pelvic Inflammatory Disease (PID)," Peters adds.

There are two types of IUDs available to women: copper IUDs and hormone-releasing IUDs. "Copper IUDs cause localized inflammation in the uterus and also are toxic to sperm," Shapiro says. "Hormonal IUDs cause the uterine lining to be out of sync with a developing embryo and thereby prevent implantation."

Additionally, both types of IUDs thicken cervical mucus and prevent sperm from getting to the upper reproductive tract. "You don't have to wait a specified amount of time prior to trying to conceive for [either type of IUD], you may [try to conceive] immediately after removal," Peters says.

Even though IUDs are much better than they used to be, there are some risks, just like with any form of birth control. Shapiro says, "The biggest risks associated with IUD use are unexpected expulsion, menstrual irregularity, pain, inappropriate placement resulting in embedment of the IUD in the uterine or cervical wall, and uterine perforation."

She notes that expulsion is the highest risk following insertion (especially if it is asymptomatic, as the woman will not have protection from pregnancy if the IUD is expelled), adding, "Because of this, I counsel people to not have sex, use tampons, or perform strenuous exercise for a few days after insertion. Other side effects that are much less common are acne, hair thinning, and mood changes."

However, Peters says the risk of pregnancy in a properly placed IUD is less than one percent. "IUDs are right up there with tying tubes as far as effectiveness in preventing pregnancy," she says.

If you’re ready to start taking the road to baby, make sure you time the removal of your IUD with your age, because that will depend on how quickly (statistically) you’ll become pregnant. If you’re not ready, keep doing you and discuss with your doctor if IUDs are a good form of birth control for you.

More Like This
What Foods Fight Nausea During Pregnancy?
OB-GYNs Explain The Connection Between Stress & Miscarriage
Diastasis Recti Exercises You Can Do At Home To Heal Your Abdomen
Here's Why Your Vagina Burns After Sex
What Parents Are Talking About — Delivered Straight To Your Inbox