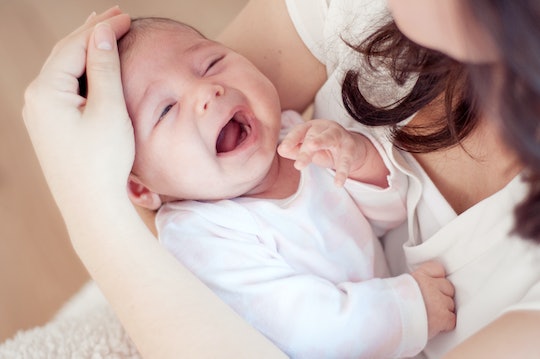 Colic Can Be A Total Nightmare, But There Is An End In Sight

If you’re reading this, there’s a high probability that you just frantically Googled “how long does colic last?” Maybe your baby is screaming currently, or you’re anticipating their next crying jag with a sense of dread, worry, or confusion. Having a colicky baby can make a parent feel helpless, and it can also adversely affect a parents’ mental health. If you’re currently in camp colic, I’m so sorry and I promise you that even if it doesn’t feel like it right now, colic will end.

Believe it or not, experts still aren’t totally sure what colic is; its clinical definition is “frequent, prolonged and intense crying or fussiness in a healthy infant” according to the Mayo Clinic. Notice that this definition does not include one set reason for the crying; this can be frustrating for parents who are trying to calm and soothe their baby but don’t know the exact cause of their child’s unease. Dr. Dennis Scharenberg, a chiropractor who works with colicky infants and author of The Colic Manual, tells Romper that some doctors aren't even using the colic diagnosis anymore, "since they have no method of treatment for colic and no symptoms other than spit up they call it acid reflux."

Katherine Williamson, MD, FAAP tells Romper that “Each [crying] episode can last 15 to 60 minutes, but sometimes the fussiness can be a couple of hours. This will occur in the evening, usually between the hours of 6 p.m. to midnight, and occurs almost like clockwork every night. It is the baby's ‘witching’ hour.” She explains that colic is a “diagnosis of exclusion” meaning that other ailments including “milk protein allergy or other forms of poor digestion, reflux, excess gas, and hunger” need to be ruled out before colic is diagnosed.

“I recommend that if your baby is persistently fussy that you should see your pediatrician to rule out other causes of fussiness that unlike colic may not as easily go away with love and time,” she says.

Scharenberg tells Romper that symptoms of colic can be more than evening fussiness and may include grunting or trouble sleeping. His website offers a 34-item list of colic symptoms including an infant's refusal to sleep on their back, scratching the face or pulling hair, wincing, crying with their eyes closed, and not wanting to take a pacifier.

Parents explained that many pediatricians operate on the “rule of threes” to diagnose colic; this means “crying bouts that start when a baby is about three weeks old (usually late in the day, although they can occur anytime), lasting for more than three hours a day, on more than three days a week, for more than three weeks in a row. It typically peaks at six to eight weeks and subsides by three to four months.” Similarly, Williams tells Romper that colic usually begins between 6 and 12 weeks of age, and can last up until four months.

Colic is largely a medical mystery but there are several theories about what causes the condition; one school of though says colic is an imbalance of melatonin and serotonin in the brain, according to Parents. Serotonin (which is highest in the evening) can cause stomach muscles to contract and cramp; this resolves itself when babies start producing more melatonin which relaxes the muscles. Keep in mind, this is just one theory of many.

One mother of three (who happens to be my mother), Marlene, whose eldest had colic tells Romper that she was so overwhelmed by her son’s crying that she would often cry when he cried, and she began to dread feeding him because she knew he was going to end up inconsolable. “Fortunately it all ended at three months,” she says.

The good news is that most research points to colic resolving itself around the three to four month mark, so hang in there! If you're desperate for a fix, you may want to consider cranial sacral massage for your infant. A 2019 study in Complementary Therapies Of Medicine found that “Craniosacral therapy appears to be effective and safe for infantile colic by reducing the number of crying hours, the colic severity and increasing the total hours of sleep.” If massage isn't your thing, there are a few things you can do to help comfort your colicky infant (and don’t forget to squeeze in a little self-care for yourself).

Williamson tells Romper, “First, make sure there is nothing obvious causing your baby's discomfort [including] being hungry, a wet diaper, overheated or chilled, [or] overstimulated with noise or bright lights. Once all these things are accounted for, and your baby is still fussy, you can lie your baby on his or her belly… Sometimes babies simply need to be held. Gentle movement such as rocking or bouncing, or perhaps a ride in the stroller or car seat, can help babies calm down when they have colic. Also making 'shh' sounds and swaddling can help soothe babies particularly two months and younger. Pacifiers can also help as the sucking movement is calming for babies.”

It may not feel like it, but you and your baby will make it to the other side. Like they say about diapers, no child ever went to college with colic (that I know of, at least.)