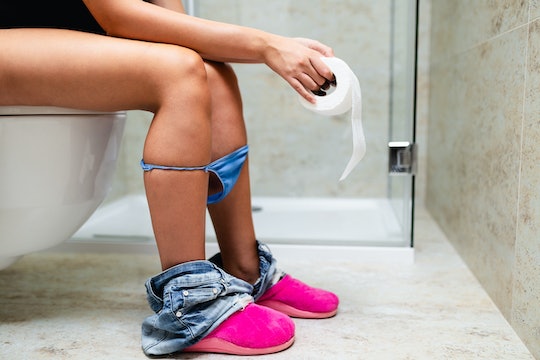 Here's The Deal With Implantation Bleeding & How Long It Usually Lasts

If you're trying to get pregnant, then the sight of some slight spotting may not necessarily mean your period is in town. Instead, the blood could be caused by something known as implantation bleeding. So how long does implementation bleeding last, and what else should you know about this potential sign of early pregnancy? Anyone who is trying to conceive should be familiar with this specific type of spotting.

So what causes implantation bleeding anyway? For the most part, this type of bleeding results from some of the very first physical changes associated with early pregnancy. "Implantation bleeding happens when the embryo makes its way into the uterus, which sometimes causes little blood vessels to burst," as explained in What To Expect. It isn't going to cause any long-term damage or anything, just the sight of a little blood. Again, it's also important to note that not everyone experiences implantation bleeding, so it's entirely possible to get pregnant without this light spotting super early on.

Now, how exactly are you supposed to tell implantation bleeding apart from the light spotting sometimes related to periods? It's a very real question, especially for anyone whose cycle is even the least bit irregular. And unfortunately, the timing of this light spotting does nothing to help clear up any confusion. In fact, implantation bleeding typically occurs around the time you would expect to see a regular period, often about 10 to 14 days after conception, as explained in the Mayo Clinic. Chances are, it will be difficult to guess whether you're dealing with spotting from implantation bleeding or the start of a regular period. "There's no way to tell the difference between intermenstrual bleeding and implantation bleeding just by looking," said fertility specialist George Patounakis, M.D., Ph.D., in Parents. The best way to tell whether you're pregnant is by taking a pregnancy test, because the early physical signs of pregnancy may not be the easiest to read correctly.

So although you may hear a lot about implantation bleeding from well-meaning friends and family, as well as plenty of TTC forums, this event is typically very fast and easy to misread. However, if you do experience some extremely brief and light spotting about two weeks after possible conception, then consider taking a pregnancy test pretty soon. The quick moment of spotting might be implantation bleeding, meaning a pregnancy is entirely possible, too.

More Like This
When Does Pregnancy Horniness Kick In?
How To Talk To Your Partner About Wanting A Baby
Can You Bowl While Pregnant? Experts Weigh In
Pitocin Induction: What It Is & The Play-By-Play