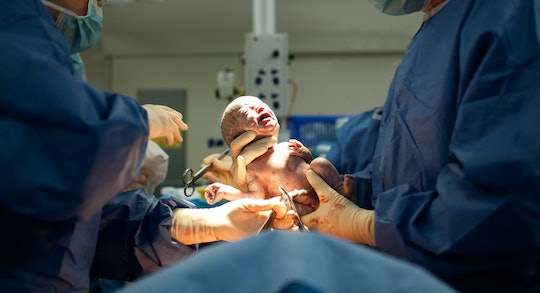 Why Won't My C-Section Heal & Other Postpartum Qs

The first time I stayed at a hospital when when I gave birth to my daughter and I had an unplanned C-section. Not exactly the best way to ease into your first hospital trip, but is there ever a good time? Luckily, my C-section was great and so was the recovery, but I was still a little panicky, especially when I saw all of those staples basically holding me together. A scar was the least of my worries, I just wanted it to heal. But how long does it take a C-section scar to properly heal?

Luckily, it doesn't take too long and the scar is less invasive than you may think. According to What to Expect, 95 percent of C-sections are done with a horizontal cut, also known as a "bikini cut". It cuts across the lowest part of the uterus, which is thinner, and results in less bleeding. Two incisions are made — one through the skin of your lower abdomen (usually right above your pubic line) and one into the uterus. Fit Pregnancy noted that a C-section scar is also really small as a baby's head most likely fits through a four to six inch incision.

Knowing all of that, it may sound like a C-section scar is going to be a big deal — a baby was pulled out of it, after all. But it's really not. Parents noted that for the first two weeks, you'll be instructed not to lift anything heavier than your baby so that your scar can heal. Some doctors may remove your staples before you leave the hospital and replace them with a sterilized tape to keep your wound closed, but some may remove them at an appointment. Personally, I didn't have my staples removed until my first postpartum check-up with my doctor, a week after I delivered.

Usually by your standard six week check-up, your scar should be healed enough that you can resume normal activity and intercourse again, noted Baby Center. Up until that point, your scar may be slightly raised, puffy, or darker than the rest of your skin, but it should be shrinking by that six week check-up. That six weeks of recovery is crucial. According to Parents, it gives your incisions time to mature so that when you do something strenuous, "the integrity is not compromised." For the next six months, it could remain a reddish-purpleish color, but it will soon fade to a white line, like most scars. (I can attest to this. I can barely see mine now.)

So give your C-section scar a full six weeks before you consider it healed. Even if you're feeling great a few weeks into recovery, it's still important to keep an eye on your scar and your activity. What to Expect noted that if you see signs of infection, like oozing from the incision, a foul smell, redness or swelling of the incision, or a fever higher than 100.4 degrees Fahrenheit, you'll want to see your doctor. But keeping your incision clean and allowing it to get some air can help speed up the healing process.