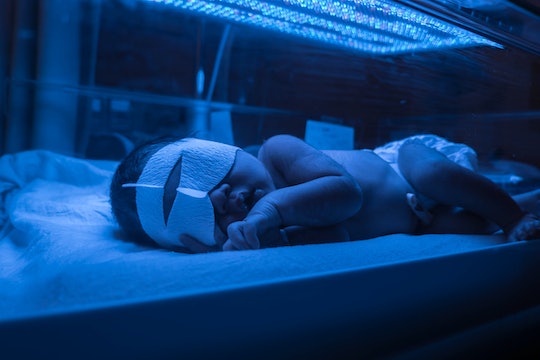 How Long Does Jaundice Usually Last In Newborns? It Depends On A Few Factors

You likely imagine the first weeks of your child's life will be pure bliss, with a little stress peppered in as you adjust to caring for another human. But the anxiety can outweigh the joy if your baby has jaundice, as your concern for their health overshadows everything else. Figuring out how long jaundice typically lasts might qualm some of that fear, though.

Per Medical News Today, infant jaundice, most easily recognized by yellow discoloration of the skin and the eyes, occurs when a baby has excessive amounts of bilirubin in their system, a waste product that forms when red blood cells are broken down. The liver typically breaks down bilirubin, but if a baby's liver is underdeveloped, it won't be able to properly process the chemical, leading to the change in color. Despite the pronounced symptoms, jaundice typically looks scarier than it actually is, with most cases clearing up on their own. And it's surprisingly common. "Jaundice in babies occurs in over half in the first week following birth and does not pose a serious threat in most," Billie Lou Short, M.D., Chief, Division of Neonatology at Children’s National in Washington, D.C. tells Romper via email. However, she went onto to say that "levels should be obtained at discharge" and you should follow up with your pediatrician. The condition often appears a few days after delivery, which is part of the reason you'll have a newborn checkup in the first week or two after birth.

There are multiple levels of jaundice, and the duration of the condition varies depending on how serious your child's case is. Mild jaundice usually clears up on its own two to three weeks, with no medical intervention necessary. In these cases, your doctor will likely recommend more frequent feedings until the jaundice is gone, according to Mayo Clinic, as the feedings will increase how much bilirubin is released in their stool.

There are a few treatment options available for more serious cases of jaundice. The first is phototherapy, where the infant is placed under a bilirubin lamp. "Bilirubin lights, a blue colored light, is used to bring the level down in 98 percent of the cases," explains Short, and the treatment typically gets takes place in the hospital. "Most babies will need to be in the hospital, although new technology with bili-blankets containing the correct light color can be used at home, if the bilirubin level is only moderate and there is no risk for disease such as G6PD or Rh disease," Short says.

If phototherapy isn't effective, the next step is typically a blood transfusion, according to Medical News Today, as it physically removes the bilirubin. But your baby would have to be in the NICU for that treatment, which is why it isn't the first step. It's also possible to do a transfusion of immunoglobulin, but it also requires a stay in the NICU. In extremely rare cases, surgery or drug treatment is necessary. Again though, most cases of jaundice will go away on their own. And "if the baby needs the bilirubin lights and hospitalization, it is usually for only two to three days," says Short, so the experience will likely be over quickly even if it enough of an issue that hospitalization is required.

In all likelihood, your little one will be jaundice-free within a month of their birth. In rare cases, it can persist past then, but it's still relatively easy to treat even when it is more severe. All that said, Short tells Romper that untreated jaundice can cause a type of brain damage, known as kernicterus, so you should contact your pediatrician as soon as possible if you notice yellowing of your baby's skin or eyes. It's better to be safe than sorry.

More Like This
Here’s What You Need To Know About That Viral 1960s Baby Formula “Recipe”
The Best Apps For Selling Used Baby Gear
The 40 Best Toys For 6-Month-Old Babies
Abbot's Formula-Producing Plant Can Reopen In As Early As 2 Weeks — Now What?