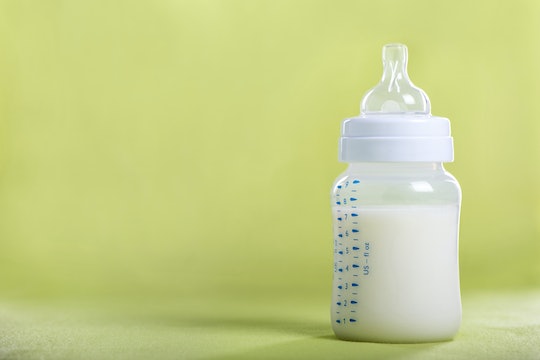 During pregnancy and breastfeeding, one of the biggest challenges women face is the fact that what they consume is inevitably transferred to their child. This is why there are so many rules and guidelines about what mothers should and shouldn't eat, drink, and so on. As such, many moms are left wondering when it's safe for them to drink alcohol, or even smoke or consume marijuana again postpartum. So, how long does marijuana stay in breast milk? New research says that it might be longer than you may think.

According to a new study by the University of California San Diego, published in Pediatrics on Monday, researchers tested breast milk samples to determine which substances would still be present after a period of time. Researchers found that THC from marijuana was detectable in 34 out of the 54 samples — or 63 percent — when tested six days after consumption, according to U.S. News & World Report. Additionally, as CNN reported of the small study's findings, which included 50 women who used marijuana, "the average concentration of THC found in those samples was 9.47 nanograms per milliliter." CNN also reported that based on this average concentration, researchers hypothesized that a 13-pound 3-month-old would "ingest about 0.040 nanograms of THC per milliliter" of breast milk.

Despite the fact that levels of THC are still detectable in breast milk nearly a week post-consumption, the more important question is whether or not those quantities could impact a baby's health.

"The question is, does it matter?" Christina Chambers, author of the study, said, according to CNN. "Is it possible that even low levels in breast milk may have an effect on a child's neurodevelopment? And we don't know the answer to that... That's a testable hypothesis and something that we want to move forward with trying to answer, because it's a critical question."

However, as noted by USA Today, while the research on whether these amounts of THC can impact a baby's health via breast milk consumption is "lacking," it's still important to simply be aware that they are present.

But that's something Chambers and other researchers want to explore further. As Chambers explained in a press release for the study published by Science Daily.

Are there any differences in effects of marijuana in breast milk for a two-month-old versus a 12-month-old, and is it different if the mother smokes versus eats the cannabis? These are critical areas where we need answers as we continue to promote breast milk as the premium in nutrition for infants.

Of course, this research also brings up the question of how many pregnant women and new mothers are consuming marijuana in the first place. The Centers for Disease Control and Prevention reported in March of this year that it has been linked to birth defects, low birth weight, and other problems with newborns. As far as breastfeeding goes, the CDC's report explained: "Chemicals from marijuana can be passed to your baby through breast milk. THC is stored in fat and is slowly released over time, meaning your baby could still be exposed even after you stop using marijuana."

With that said, there's some mixed research about the safety of smoking while pregnant. For instance, according to a 1991 study published by the West Indian Medical Journal, Jamaican women who smoked marijuana during pregnancy, and actually found that babies whose mothers smoked during pregnancy had better autonomic stability and reflexes. Though the study is over 20 years old, that doesn't necessarily negate the results.

Regardless, what matters most is that pregnant women are informed about all of the research regarding their health, their bodies, and the safety and well-being of their children. And of course, if mothers have any questions or concerns on the subject, always consult with a doctor or health care professional.