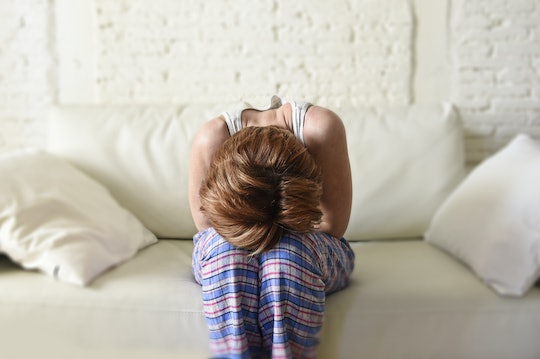 If You Get Norovirus, This Is How Long You Can Expect To Be Miserable For

'Tis the season for all things contagious, gross, and vomit-y, am I right? No matter that spring is just around the corner (thank goodness), illnesses like influenza and norovirus are going strong, and they're just begging for a chance to ruin your weekend plans. Even those of us with the best of intentions — I'm talking hand washing like a champ and packing hand sanitizer at all times — are getting hit hard. And although you've been hearing a lot about influenza, what about good old fashioned norovirus? I mean what is it and how long does norovirus last?

"It is most likely to be contracted in crowded environments like cruise ships, hotels, college dorms or, as we have seen this week, at the Winter Olympics in South Korea," he says. "Norovirus is extremely common with millions of cases in the United States each year."

Also common? According to the Centers for Disease Control and Prevention (CDC), norovirus is the leading cause of illness and outbreaks from contaminated food in the United States. "Most of these outbreaks occur in the food service settings like restaurants," the CDC noted on its website. "Infected food workers are frequently the source of the outbreaks, often by touching ready-to-eat foods, such as raw fruits and vegetables, with their bare hands before serving them."

Cutler says the best way to prevent the spread of germs is with careful hygiene. That means if you have norovirus, then make sure to frequently wash your hands with soap and water. When disinfecting household surfaces, doorknobs, and other frequently touched areas, Cutler recommends using a bleach solution in order to effectively kill norovirus. You should immediately clean and disinfect contaminated surfaces after throwing up and/or having diarrhea by using five to 25 tablespoons of household bleach (that's about one and a half cups) per gallon of water, explained the CDC.

There is no specific medicine that helps treat people with norovirus illness, so the best "prescription" is to drink plenty of liquids to help prevent dehydration.

"The disease will usually resolve on its own without complications as long as adequate hydration is maintained," Culter says. "But if vomiting prevents adequate fluid intake, then hospitalization for intravenous fluids may be needed."

If you're curious about how to tell the difference between norovirus and the notorious influenza (flu), then experts say there are a few key differences. "The flu is an upper respiratory infection that causes sore throat, chills, body aches, runny nose, and coughing," Dr. Joshua Kosowsky said to Boston.com. "Norovirus is a gastrointestinal illness that causes diarrhea, vomiting, and nausea."

Dr. Jann T. Caison-Sorey, associate medical director at Blue Cross Blue Shield of Michigan, tells Romper in an email interview, that children who have the flu may need to visit the hospital if they fever that does not go away with analgesics, abnormal behavior, a refusal to eat or drink, a change in your child's cry, inconsolability, respiratory distress, limpness, and even seizures. If you do visit your healthcare provider or a hospital, they will possibly run a number of tests including a nasal swab for influenza, electrolytes in the body, strep, a complete blood count with differential, and chest x-ray.

There is, of course, one very similar trait amongst influenza and norovirus — they both suck. So please take care and, um, also steer clear. I mean that in the nicest way possible.

More Like This
Why Your Vagina Smells Like Fish & What To Do About It
I Took Drinking Out Of My Bedtime Ritual & Unfortunately, It's Great
Viral Hives In Children: What Doctors Want You To Know
Weed Moms Are Changing The Culture Around Marijuana
What Parents Are Talking About — Delivered Straight To Your Inbox