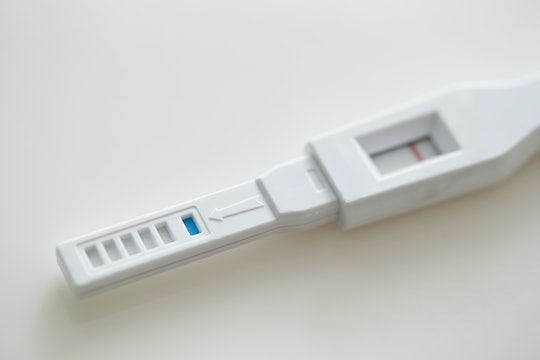 You and your partner are totally doing this. You've decided to give up waking up at noon on Sunday to go to lazy tequila-filled brunches to wake at zero dark and change diapers. But when should you be knocking the most boots? How long does ovulation last? Is it more of a window of time or a doggy (style) door?

The human body is kind of amazing. The average woman's cycle is about 28 days long and follows a predictable path. There are four main phases in that cycle — the menstrual, follicular, ovulation, and luteal phases, according to Menstrupedia. I like to refer to them by my emotions during the phases: tampons and target practice, working out and feeling fresh, eggplant emojis all day long because you look good to me, and "Are those french fries?"

According to Our Bodies, Ourselves, the first five days are spent with Aunt Flo and the first 14 are in the follicular phase, where hormones stimulate the follicles to prepare your eggs to be fertilized and your womb to do a little interior decorating to welcome visitors and, hopefully, house guests. Then there's the ovulation phase, where the egg is set free like a Hunger Games tribute on its way to the cornucopia to meet its potential victor.

This is the phase with which most women who are trying to conceive are concerned. How long does ovulation last? Ovulation is actually a really short process. According to the American Pregnancy Association, ovulation, the actual release and life of the egg, is only 12 to 24 hours in duration and actually occurs in the very beginning of the luteal phase. However, fertility is another story.

The fertile window surrounds the period of ovulation. A study published in The BMJ found that, on average, a woman is fertile for a period of six days — five days leading up to the date of ovulation, and the date of ovulation itself. However, the study noted that each woman is different, as is the viability and quality of the sperm trying to meet the egg, so each window is different, and occurs at different times in the month. They found that some women have a relatively short follicular phase (ME. I ovulate at day nine, because I have ADHD and cannot wait), and some women ovulate much later, having stunted luteal phases, according to the study. Another study in the New England Journal of Medicine found that a shortened luteal phase indicates a tendency towards difficult conception.

The luteal phase, or the PMS phase, is when the luteinizing hormone (LH) surges, releasing the egg to be fertilized, and then triggers the body to start preparing for another menstrual cycle, according to Reproductive BioMedicine Online. Women are fertile for the very first day of this cycle, and then its every egg for itself.

While there are signs that point to ovulation and your fertile period, the surest method is to test for the presence of LH in your body with an ovulation kit, start mapping your cycles, and get down to business.