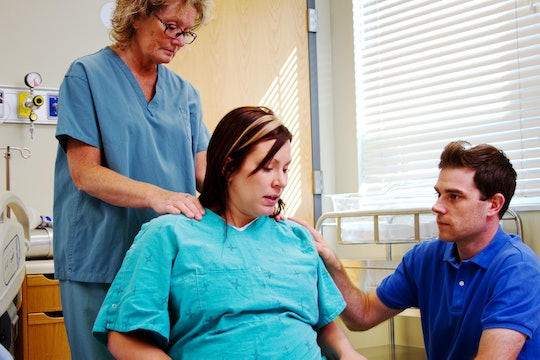 This Is How Long You'll Transition In Labor

Let's be honest, everybody knows that labor isn't a five-minute process. While the time it takes to go through labor can vary from person to person, it's a pretty well-known fact that delivering a baby can take some time. But one stage in particular, the transition stage, sounds like the scariest one of all. So how long does transitioning in labor take?

According to Lamaze Certified Childbirth Educator (LCCE), Fellow of American College of Childbirth Educators (FACCE), and owner of Shining Light Prenatal Education, Deena Blumenfeld, transition is actually the shortest phase of labor. "This is the time when a laboring mother is 8 to 10 centimeters dilated," she tells Romper. "On average, it lasts 30 minutes to two hours, sometimes more."

Really puts into perspective how long labor in its entirety will take, right? Despite it being the shortest phase, however, Blumenfeld notes that the transition phase is the most intense time physically and emotionally for you as your hormones are on high alert, preparing for pushing and the actual birth of the baby. "Moms often recede back into themselves and have a strong internal focus on their bodies, which is good, and helps them cope with what's happening by tuning out external distraction," she says.

But in some cases, the transition phase could take even longer than the average times. "A longer transition phase may be due to mom's labor posture," Blumenfeld says. "If she's on her back, labor tends to be slower. She is generally better off in a more upright position, like hands and knees, standing, or squatting on the toilet." If you're already trying out new positions, the transition phase could also take longer thanks to your little one's position. "A baby whose head is well applied to the cervix will help mom dilate quicker. A baby who is higher up, or in another less than optimal position can cause labor to take a bit longer," Blumenfeld says.

No matter how long the transition phase takes you, it helps to know that it's the last phase of labor before you get ready to actually push out your baby. So, you know, depending on how you feel about that, a few extra moments spent transitioning might not be such a bad thing after all. Just think of it as the best blind date ever — you're totally going to meet the love of your life when it's over, no matter how long it takes.