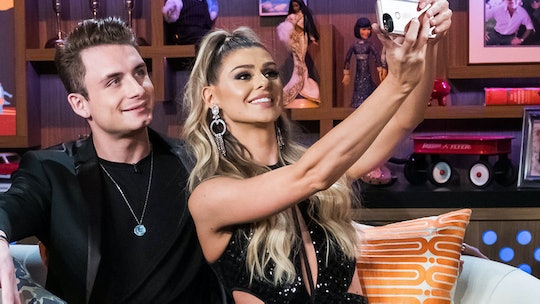 Whoa, James & Raquel From 'Vanderpump Rules' Have Been Through The Wringer

Fans of Bravo's Vanderpump Rules know that the love between James Kennedy and Raquel Leviss is electric. Despite the numerous cheating allegations and infamous pasta bowl fight in Season 6, the couple has made it through it all and seem to have come out stronger than before. But how long have James and Raquel been dating? TheVanderpump Rules stars have been together for quite some time.

According to Bravo, James and Raquel met while James was DJ-ing on New Year's Eve in 2016 and as the saying goes, the rest is history. The couple then went public with their relationship on Valentine's Day after James shared a selfie with Raquel on his Instagram captioned, "Late lunch with my love @raquelleviss 💞 happy valentines days everyone!" So given the timeline, James and Raquel have been together for over three years.

In an interview with Bravo's The Daily Dish podcast back in 2017, Raquel went on record to share her relationship with the self-proclaimed "white Kanye West," explaining that she didn't actually know what Vanderpump Rules was before meeting James.

"The night I met him I had no idea what the show was...I never watched an episode," Raquel said. However, Pump Rules gave Raquel a golden opportunity to dig into James' past without even checking his Facebook. And although the Bravo series contained some steaming hot tea about James' former relationships, Raquel was able to use the info to her advantage.

Although Raquel hasn't been on Vanderpump Rules since the start of the series, she first appeared in the Season 5 premiere and eventually became a recurring cast member on the Bravo show in Season 6. Since her debut, the couple has faced not one, but four cheating scandals that were brought to light onscreen.

In Season 5, Gerelyn "GG" Gilbert claimed that she and her friend Elle hooked up with James while he was with Raquel. James denied the allegations and called both women "groupies." Then in Season 6, rumors swirled when Jax Taylor revealed that James' best friend, Logan, admitted that he hooked up with James. Later in Season 7, Kristen's friend, Hope, confronted Raquel at Pride to tell her that she slept with James at Coachella.

Nonetheless, Raquel stuck with James. And despite the hardships, the James and Raquel have used the drama to grow stronger together.

"Obviously I understand all the rumors and the drama and everything that's happened on the show," James told Bravo. "You know we've basically gone through it together and I felt like these girls went to the end of the Earth to try and ruin my relationship. But we've stuck through everything and we love each other. But that's what makes relationships stronger is going through hard times and good times."

When a brave Watch What Happens Tonight with Andy Cohen viewer asked James if he would propose to Raquel anytime soon, the Vanderpump Rules star replied, "You know, she's definitely the one if there is one, so soon, for sure."

Regardless of how viewers may see James and Raquel's relationship on Vanderpump Rules, the couple seems like they're in it for the long haul. So here's to more years of love — and plenty drama.