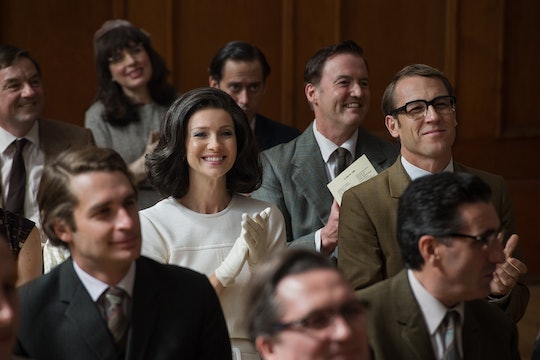 Jamie & Claire Have Been Apart For Far Too Long On 'Outlander'

Sometimes the world can be a cruel place. Just ask Jamie and Claire Fraser, a fictional time-traveling couple whose love for one another has carried them through hell and back, and who were forced to spend half of their adult lives apart after parting ways at the end of Outlander Season 2. So how long have Jamie and Claire been apart on Outlander since that heartbreaking goodbye? Season 3 will open by telling the story of the sad decades these two spent when they couldn't be with one another.

Claire leaves to go back to her own time through the standing stones on Craigh Na Dun at the end of Season 2. This was for the protection of her unborn child and because Jamie assured her that there was no actual way he was going to survive the Battle of Culloden. This battle took place on April 16, 1746. According to the books, Claire was then 30 years old while Jamie was about 26. Claire was then sent back to 1948, where she reconnects with her (other) husband Frank, and the two of them raise Claire's child, Brianna together. Season 3 of the show is based on the third book in Diana Gabaldon's series, Voyager. Though the timeline of the show will be presented somewhat differently, it's safe to assume that Claire goes back to the 18th century in approximately the same year in the show as her book counterpart. Warning: book spoilers ahead!

The book Voyager opens in the year 1968. Frank Randall has died, and Claire and her daughter Brianna travel back to Inverness from Boston where Brianna grew up. Here, they meet up with Roger Wakefield, who you might remember as the cute little kid the Reverend Wakefield adopted from the first season. Now Roger is a grown up and he has a serious crush on Brianna, now 20 years old. Of course, we saw a lot of this play out at the end of Season 2, but it will still take some time before Claire actually journeys back in time again. When all is said and done, roughly two decades will have passed since Claire and Jamie parted ways.

When she goes back to Jamie she's 50 years old, and Jamie would be around 46. Interestingly, except for one very cool streak of gray hair in Claire's hair, she doesn't appear to have aged at all. Jamie doesn't even have a streak of gray hair. He's simply the most virile 46-year-old I've ever seen in my life. With genes like that, Brianna will probably look like she's 20 until she dies. I wasn't exactly expecting the show to make Claire and Jamie look their actual ages, but still, I would very much like to know what kind of miracle face cream Jamie has apparently been diligently using in that cave in the 1700s.

But regardless of how many years they've been apart, I still expect to see just as much passion between the two of them once they reunite.