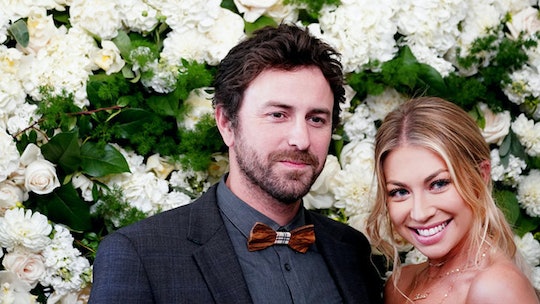 Fans have seen the ups and downs of Stassi Schroeder and Beau Clark's relationship since Beau made his first appearance in Season 7 of Vanderpump Rules, but the couple has been dating long before the seventh season premiere. So how long have Stassi and Beau been together? Vanderpump Rules fans are dying to know about the timeline of this whirlwind romance.

Admittedly, the Vanderpump Rules queen bee has dated her fair share of duds since the premiere of the Bravo reality series in 2013 — and they haven't exactly gone according to plan. In Seasons 1 and 2, Stassi dated fellow SURver, Jax Taylor, who cheated on her. She also had those on-again off-again relationships with Frank Herlihy and Patrick Meagher. Now, Bravo fans and the SUR team can (finally) agree that Stassi has found her match in Beau.

On Dec. 10, Stassi went on Watch What Happens Live With Andy Cohen and she revealed a few details in regards to her relationship with Beau, including when the couple first met. During a game called "Spill the Beautea" Stassi revealed that she was introduced to Beau by Pump Rules co-stars Kristen Doute and Katie Maloney-Schwartz.

"Katie saw him at the Grove and looked over and said, 'I think that's a dude that I think Stassi would love,'" Stassi said. "And he made out with Kristen on a movie set 10 years ago!" Later, the couple revealed that they met in Aug. 2017 and Beau told Stassi that he loved her by the end of Jan. 2018.

While the couple is now head over heels for each other, Beau admits that he didn't have a great first impression of Stassi when he first met her. In a Feb. 2018 episode of her podcast "Straight Up with Stassi," Beau explained that he assumed what kind of girl Stassi was by looking at her.

But Beau decided to go on a date anyway. “We ended up closing down Mondrian talking. I don’t think I’ve laughed as hard ever with anybody, just to have a great conversation with someone on a first time hanging out was fantastic," Beau said. And the rest was history.

Now, Stassi has been dating Beau for over a year — and as cheesy as this sounds — she couldn't be happier. Since their relationship began, even Bravo producers have seen a change in Stassi's personality, claiming that she is "happier, calmer, and more mature." On Jan. 15, the Vanderpump Rules star went on Andy Cohen and revealed that she knows that Beau is The One.