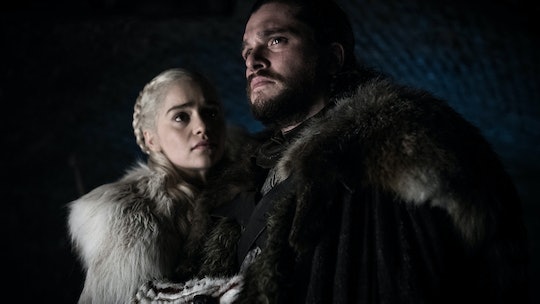 You better cancel your plans on Monday, Apr. 29, because Game of Thrones is coming on Sunday night to destroy all that you hold near and dear to your heart. The Battle of Winterfell is finally here, but is anyone ready for what lies ahead? HBO has already promised fans an epic battle, as the third installment to the eighth season is expected to become the longest episode in the show's history. So how long is Game of Thrones Season 8 Episode 3 in length? Although Season 8 is shorter than previous seasons, the runtime of the final four episodes come in at over an hour.

You might have been disheartened to hear that the eighth and final season of Game of Thrones will have a shorter episode count. But, that doesn't necessarily mean that the season itself has decreased in length. The first two episodes of the six-episode season were both just barely under and hour. Episode 3 is the first of the long-winded episodes, with a runtime of 1 hour and 22 minutes. Following that, the fourth episode is expected to be 1 hour and 18 minutes, while the final two episodes will be two minutes shy of the third, with 1 hour and 20 minutes each. Per Polygon, this brings Season 8 to a grand total of 432 minutes, which makes the last season slightly shorter than the length of Season 7, which came in at 440 minutes with seven episodes.

Filming the longest episode in the show's history didn't come easily. According to Entertainment Weekly, the final showdown between the living and the dead took 11 weeks of night shoots in temperatures that were just above freezing. However, the work put into the massive Game of Thrones episode won't go unnoticed. The Battle of Winterfell will consume the entire third episode and will be filled with long, consecutive battle sequences that could challenge those found in the Lord of the Rings franchise.

“What we have asked the production team and crew to do this year truly has never been done in television or in a movie," co-executive producer, Bryan Cogman, said. “This final face-off between the Army of the Dead and the army of the living is completely unprecedented and relentless and a mixture of genres even within the battle. There are sequences built within sequences built within sequences."

"It’s been exhausting but I think it will blow everybody away," Cogman said.

While fans know that Episode 3 will be showstopping, everyone is anxiously anticipating a few key deaths during the Battle of Winterfell that will surely affect the rest of the season. And although fans can nitpick at all the speculated foreshadowing within the last seven seasons of Game of Thrones, HBO has been extremely tight lipped when it comes to the final season.

Speaking with Entertainment Weekly, Benioff and Weiss revealed that it's been getting harder and harder to keep information about what's to come off the table.

"If the NSA and CIA can’t protect all of their information, what hope do we have? Stuff is going to leak no matter what, so you try your best to limit it," Benioff said. "There’s always going to be a certain level of douchery, of people trying to spoil things. But luckily most people out there don’t want the story to be spoiled."

That being said, the showrunner will feel the weight of potential spoilers until Game of Thrones ends. "We won’t be relieved until the final episode airs without a leak," Benioff said.

There's plenty to be worried about in Game of Thrones Season 8 Episode 3. From who lives to who dies, this monstrous episode is bound to be a turning point in the HBO series. Luckily, the Game of Thrones team has given the episode the runtime length it deserves.