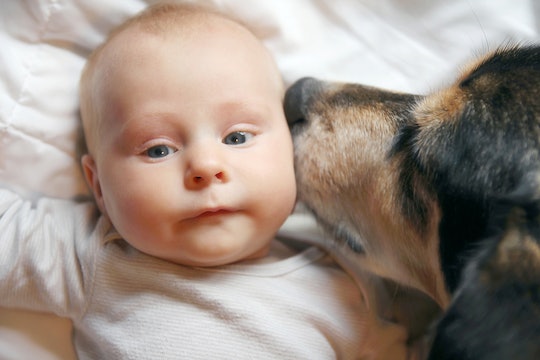 Bringing A Baby Home? Your Dog's Going To Learn Their Name In No Time

When you bring a dog into a home with a baby (or vice versa, if you were pet parents first), it's important to familiarize your pet with the baby, so that the pup knows that the child is part of the family. Once they do, when will your dog learn the baby's name? Perhaps quicker than you think.

Research has found that dogs are not only quite intelligent, they can also learn new words, such as people's names, after just a few repetitions. Canadian canine researcher Stanley Coren, PhD, presented a newsmaking report back in 2009 on the topic of "How Dogs Think." Among his findings per Science Daily: Dogs are as intelligent as a 2-year-old child (which, as any parent of a toddler knows, is pretty darn smart).

While most dogs are capable of learning more than 150 words, some pups can learn even more, Dr. Coren's research concluded. One example is Rico, a Border collie who could understand 200 words with remarkable accuracy, according to How Stuff Works. Not impressed yet? Get this: Wofford College professor John Pilley taught his dog, Chaser, to recognize 1,022 nouns, reported The New York Times. The brilliant pet was able to learn an average of two new words a day.

How is that possible? Like humans, dogs acquire language through a process called fast-mapping, explained the website Dog Discoveries. The dog's brain is wired to help it quickly link a word to a specific object or concept after just one exposure. The pup can then distinguish new words from ones they've already learned. In other words, if your pup knows the words "bone" and "ball," and you put it in a room with a bone, ball, and blanket, it will immediately pick the right object when you say "blanket," because it has already associated the other two items with different words.

By the same process, dogs learn to recognize the names of the people in their household by linking repetition of the name with the specific person. So if your pet already knows you and your partner as "Mommy" and "Daddy" (or whatever names it associates with you), it should take almost no time to learn your baby's name.

Try having your dog sit down near you while you hold the baby on your lap, then repeating your child's name several times. Then have someone else take the baby into another room while you ask, "Where's [your baby's name]?" If the dog goes to the room with the baby, give it a treat. After a few tries, your dog should get the idea. If your child's name is Gabrielle or Peter, so much the better; Animal Planet's website explained that dogs respond best to words that start with a hard consonant, like P or G.

Your dog will learn faster if you consistently use the same word to mean the same thing, said Dr. Coren (as quoted in Animal Planet's website). So if you want your pet to recognize the name of your baby Kaylee, you'll get better results if you say "Kaylee" every time, rather than "Baby" or "Kay-Kay."

The other factor affecting a dog's learning speed is its breed. Both Rico and Chaser are Border Collies, a breed Dr. Coren called the most intelligent of all dogs. This herding dog was bred to follow commands quickly to keep livestock in line, and it's eager to learn and work hard. In an interview quoted by Science Daily, Coren added that the six other super-smart breeds are Poodles, German Shepherds, Golden Retrievers, Dobermans, Shetland Sheepdogs, and Labrador Retrievers.

But even if your dog is a Frenchie, Greyhound, Akita, or mutt, it should be able to recognize your baby's name in a few days with patient repetition and encouragement. Then it'll be only a matter of time before your pet and your child become lifelong friends.