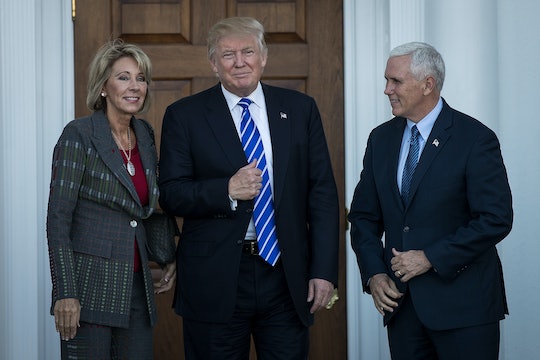 Here's How Long Betsy DeVos Will Be Education Sec.

It looked as though it might not happen for a brief, shining moment. Michigan billionaire Betsy DeVos, chosen by President Donald Trump as the incoming education secretary, was struggling to find support in the Senate after a difficult confirmation hearing. Senate Democrats unanimously voted against her, and even some Senate Republicans simply couldn't get on board with an education secretary who seemingly knew very little about education. In the end, DeVos edged her way in with a 51-50 vote. But how long will Betsy DeVos last as secretary of education?

DeVos is the first Cabinet member in history to rely on a tie-breaking vote to be cast in order to secure her confirmation; Vice President Mike Pence cast that vote on Tuesday after Senate Democrats debated throughout Monday night and into Tuesday morning in an effort to secure just one more vote against DeVos from the GOP. Republican Sens. Susan Collins of Maine and Lisa Murkowski of Alaska already voted against DeVos after receiving thousands of calls from concerned voters in their respective states who did not see DeVos as a viable option for education secretary. Murkowski said in her speech from the Senate floor:

I have heard from thousands, truly thousands, of Alaskans who shared their concerns.

And yet, Betsy DeVos is now the education secretary in Trump's administration.

But exactly how long will she remain in her new position? After all, DeVos has zero experience running a public school system, and made it abundantly clear during her confirmation hearing that she was woefully unprepared to deal with complicated curriculum (and let's not forget, DeVos thought school children in Wyoming might need to carry guns to school to protect themselves from grizzly bears).

She has no experience in shaping policy, and appears to focus all of her attention on two issues; DeVos is an avid supporter of charter schools and the school voucher system. Unfortunately, neither of these issues takes rural public schools in remote areas into account; not every town has dozens of different school options available.

The good news is that Cabinet members do not enjoy a fixed term like the president; if Trump is unhappy with the way DeVos is doing her job, he can replace her at any time. When administrations change, Cabinet members generally resign. Otherwise, they hold their positions until a successor is chosen.

Will Trump consider removing and replacing DeVos? She has been his most divisive nominee to date, and he has been unfailingly supportive of her despite widespread criticism. And Trump doesn't exactly have a history of saying "You know what, guys? I was wrong. Let's work on finding a better fit here."

Bottom line? We could have DeVos sitting as education secretary for the foreseeable future, unless people continue to protest and force change with the sheer power of their voices.