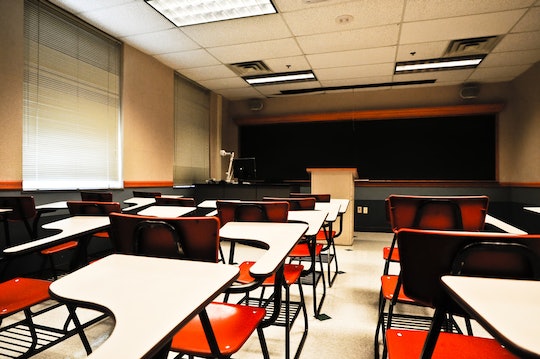 How Long Will L.A. Schools Be Closed After The Bomb Threat? Authorities Are Investigating All Of The District's Campuses

All Los Angeles United School District schools closed Tuesday after receiving a bomb threat, according to the Los Angeles Times. A school board member received a "credible threat" via electronic communication, though school officials haven't specified exactly what that means. The threat involved packages and backpacks left on campus, and authorities searched the district's schools, which number over 900. How long will the LA schools be closed? More than 700,000 students will remain home until further notice, which might be Wednesday at the earliest.

"We get threats all the time. This was a rare threat," LAUSD Superintendent Ramon Cortines said during a press conference Tuesday, according to the LA Times. Police said the threat came in an electronic format and threatened multiple campuses, although specific schools were not named. ABC reported that the threat came from overseas — specifically, an IP address in Frankfurt, Germany. L.A. police chief Charlie Beck said at a press conference, however, that authorities believe the message came from closer to home, even though it was routed through Frankfurt.

This bomb threat comes fresh off the heels of the nearby San Bernardino attack, which left 14 people dead less than two weeks ago, and Cortines said he was not willing to take a risk by keeping students in school, according to the LA Times:

I am not taking a chance of bringing children into a place, into any part of a building, until I know that it's safe. I am not going to take a chance with the life of a student.

Police will be clearing all of the schools in the LA district before students are allowed to re-enter, although officials believe schools could re-open Wednesday.

The district sent automatic calls to parents Tuesday morning telling them to keep their children home for the day, ABC reported. Students who had already been dropped off before the announcement were supervised until parents could pick them up, requiring valid ID to do so.

School board president Steve Zimmer requested community cooperation, according to VICE, saying, "We need employers to show the flexibility that a situation like this demands. And we ask you to show the maximum possible flexibility with your employees who are primarily mothers and fathers and guardians today in this situation."

New York City weighed in on the situation on Tuesday, bringing to light that L.A. was not the only city to receive the threat. Officials in New York quickly dismissed the threat as a hoax, according to TIME, with Mayor Bill de Blasio urging the public not to overreact. He said, "Our schools are safe. Kids should be in school today."

At a press conference at 1 p.m. ET, Los Angeles Mayor Eric Garcetti added his voice to the situation, saying, "We will continue to hope that this is nothing and that our kids can be back in school tomorrow."

LA police chief Charlie Beck spoke as well, and mentioned that Southern California is going through "tough times," likely referring to the San Bernardino attacks, and said it's "irresponsible" to criticize LAUSD's decision to preemptively close schools. Investigations are ongoing, and President Barack Obama is receiving updates on the situation.