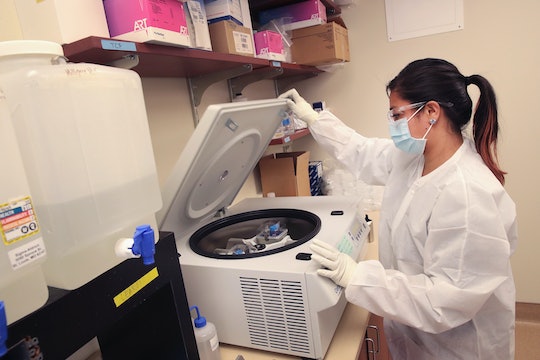 How Long Will The Zika Vaccine Be In The Trial Stage? Testing Takes A Long Time

Two different Zika virus vaccines are currently in human trials, and so far, things are looking good. The bad news is just how long the Zika vaccine trials will take. "Several years may be needed before a fully tested and licensed vaccine is ready for use," the World Health Organization's Nyka Alexander told CNN, and it's unlikely that large-scale trials will commence in the next year. According to the BBC, "the very earliest a vaccine could be widely distributed is around 2018." And that's only because it's being fast-tracked; some vaccines take decades to create. In comparison, two years sounds like nothing, but that's little comfort to those living in Zika-affected areas, particularly those who are pregnant or trying to conceive.

Speaking to the Washington Post, National Institute of Allergy and Infectious Diseases director Dr. Anthony Fauci explained how vaccine trials work, and why they take so long. Phase 1 trials are conducted on a small group of volunteers, and aim to answer two questions, Fauci said: "Is it safe and does it induce the kind of response that you would predict would be protective?" After being injected with the vaccine, volunteers are monitored for adverse effects, and their blood is tested for antibodies to the virus. If all that goes well, Phase 2 begins. Working in an area of active infection, large groups are vaccinated, and researchers monitor the spread of the disease to answer question three: "Does it work?"

NIAID began Phase 1 trials in early August with a group of about 80 people, and Fauci predicts that it will conclude late November or early December. In January or February 2017, Phase 2 will begin when thousands of volunteers in an active outbreak area are inoculated. From there, it's a waiting game. Ironically, high infection rates are actually the hope at this point, because the more rapid the spread, the faster the vaccine will be proven effective. "When there are a lot of infections, you'll know right away whether it works," Fauci said. The earliest that NIAID will know their vaccine works would be early to mid-2018, but if the infection rate slows, it could take another year or two. And of course, that's all dependent on their funding, which is rapidly dwindling.

NIAID isn't the only game in town, though; Inovio Pharmaceuticals and GeneOne Life Science are currently collaborating on a similar Zika vaccine. On August 29, they entered Phase 2 with 160 subjects in Puerto Rico, where Zika is currently spreading like wildfire, meaning conditions are perfect. Inovio President and CEO Dr. J. Joseph Kim said in a press statement, "The rapid progression of the Zika outbreak in Puerto Rico provides an immediate and unique opportunity to assess a preventive vaccine in a real world setting." That puts them few months ahead of NIAID; Kim said that if Phase 2 is a success, Inovio plans to meet with regulators in 2017 to create a plan to get the vaccine on the market.