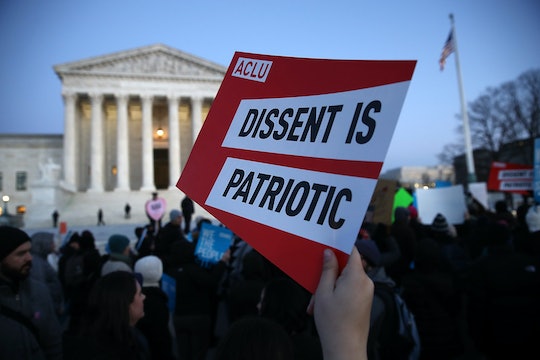 The (Very Odd) Rules Of A Senate Filibuster

Senate Democrats are vowing to block President Trump's nomination for the Supreme Court with a filibuster, which is either a good or bad thing depending on your politics. When senators with whom you disagree are blocking legislation you want, a filibuster is an annoying waste of time. When it's senators filibustering for an issue you care about, the filibuster is brave and all-American. You could argue that this is mainly because a filibuster takes stamina — and there's no guarantee as to how long someone needs to filibuster to block the Supreme Court pick (or any proposed legislation). That's bravery.

To begin the filibuster, a senator will have to ask Senate majority leader Mitch McConnell for the floor. And McConnell will have to give it to them, because the Senate has this thing about "unlimited debate," and there are no time limits for how long someone can debate an issue (unlike in the House of Representatives, where they have an hour-long limit, and hence, no filibuster rule).

They then have to stand — as is protocol for any debate in the Senate — and start talking. They can talk about whatever they want, really, but they'll probably start off by talking about how they don't like Trump's choice and list the reasons. Once, in the 1930s, Louisiana Sen. Huey Long quoted the Bible, read the Constitution, and described his recipes for fried oysters and potlikker to filibuster.

There's a catch though. They can't eat, though there's a rumor that they are allowed to have friends pass them hard candies for a sugar rush from the Senate's secret candy drawer. They can't sit down (hence Wendy Davis' infamous pink sneakers from her legendary 13-hour filibuster on the Texas Senate floor). The real kicker? They cannot take bathroom breaks. If they sit or leave the floor to pee, they essentially yield the floor and the filibuster is deemed over.

It can also come to an end if the opposition gathers 60 members to get a cloture vote. To begin the cloture process, Republicans would need 16 votes to make it official and then gather the rest as the Democrat rambles on, reading tweets or talking about their Bachelor fantasy team.

Republicans are the majority in the Senate, so gathering 60 votes could be easy — though if even just 14 of them turn to the Democrats side, which is possible given how controversial Trump is these days, cloture will be impossible and it's just a matter of waiting until the filibustering senator breaks.

The filibustering senator is allowed to take a little breather and ask their allies to ask them a question, Jeopardy-style, to allow them a minute to slug some water or, oddly, milk. If the other senator doesn't form a question, that, too, could be a filibuster foul, as would be drinking Diet Coke or coffee. Seriously, the filibuster is really an endurance test. But let's face it: What we really want to know is how they go to the bathroom.

There are rumors that senators come prepared with adult diapers or even a catheter. Davis' office, after her filibuster against an abortion bill, semi-confirmed that she wasn't afraid to just let it go. Her office confirmed that she "made all necessary preparations" for her state senate filibuster. (Trump will most certainly be grossed out, as well as infuriated, by any Democrat who dares stand in his way.)

To date, Strom Thurmond holds the record for the longest filibuster in history. He lasted 24 hours and 18 minutes opposing the Civil Rights Act of 1957 (he was unsuccessful). He was reportedly given a break to eat a steak sandwich given the absurd length of his feat. In advance of his filibuster, he also reportedly took steam baths for days beforehand to dehydrate himself so he didn't have to pee (or succumb to the apparent indignity of an adult diaper or catheter).

Whoever plans on taking a stance to oppose Trump's Supreme Court nomination better start preparing now. A filibuster doesn't guarantee that the nominee will be shut down, but it's great political theater and worth tuning into C-SPAN for — if only to try to figure out whether the senator went for the diaper or the catheter.