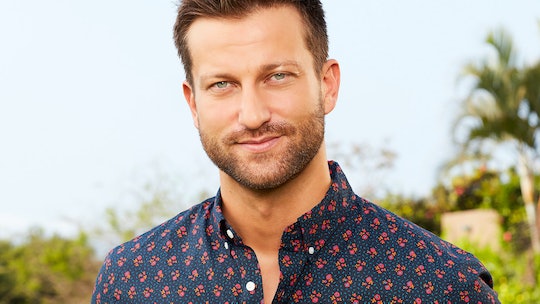 I hope you packed your SPF, because Bachelor in Paradise is back for the summer, and it's already radiating some serious drama. Thus far, this season has given fans a front row seat to the feud between Caelynn Miller-Keyes and Blake Horstmann as well as the highly anticipated return of Chris Bukowski, the reigning champion of Bachelor Nation appearances. But given his impressive title and the whopping amount of Bachelor alum who come back to the franchise in later seasons, viewers have been asking how many Bachelor shows Chris Bukowski has been on.

As of Bachelor in Paradise Season 6, Chris has been a contestant on a Bachelor-related show six times. He made his first appearance on Emily Maynard's season of The Bachelorette, alongside Season 22's Bachelor Arie Luyendyk Jr. And although he was eliminated following the hometown dates, Chris was later recruited for Season 3 of Bachelor Pad. During his time on the spin-off, Chris and his Bachelor Pad partner, Sarah Newlon, only came in second place. But the star popped up again in The Bachelorette Season 10 when he tried to crash Andi Dorfman's opening cocktail party. Chris camped outside the mansion for a week, per Us Weekly, but he was eventually shut down. The corporate sales director then showed up on BiP Seasons 1 and 2. However, he didn't last long in either season and was sent home in Week 3 and Week 4, respectively.

After five failed attempts at finding love within The Bachelor franchise, Chris announced his retirement from reality TV. During the BiP after show, titled After Paradise, Chris explained why he needed to step away for good.

"I became obsessed with being on TV," he said. "It led me stumbling down a long, dark jungle path to embarrassment. I became a joke, but I kept coming back because I truly believed I could find love and fix my reputation on one of these amazing journeys."

Nevertheless, Chris washed up on the shores in Mexico for BiP Season 6, securing his record with six total Bachelor appearances.

That being said, a lot has changed since Chris was last on Paradise four years ago. The star recently admitted he wasn't surprised when he received the call to star in BiP, according to an interview with Entertainment Tonight. However, despite his long run with the ABC reality franchise, Chris needed to come in with an open mind.

"The show felt completely different for me this time around," he said. "I've been disconnected from the franchise a little bit. I haven't really been watching too much. I watched Arie's season because he was on The Bachelorette with me. So going into this, I didn't really know anybody. I had low expectations, and I just wanted to get to know everybody. It was great."

Nonetheless, it looks like the biggest change of BiP is in Chris himself. While most fans might remember the reality star for his messy drama, the break from TV seems to have matured Chris for the better.

"I feel like I started this when I was so young," Chris told Us Weekly. "I just turned 25. I’m 32 now, so I felt like it was a good time for me to come back and do this in the right way."