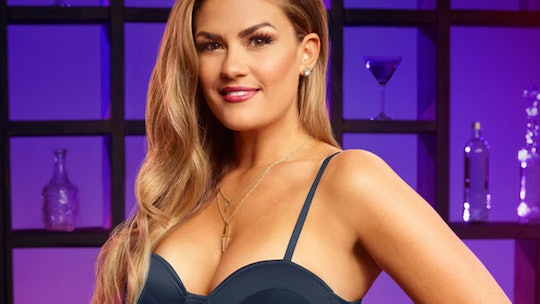 Brittany's Father & Brothers Lay Down The Hammer On 'Vanderpump Rules'

Brittany Cartwright's Kentucky family is making their way up to West Hollywood in the next episode of Vanderpump Rules. So you definitely won't want to miss it. While everyone is coming to prepare for Brittany's engagement party, the family visit isn't exactly all fun and games for her fiancé, Jax Taylor. In the Apr. 22 episode, titled "Brittany and the Beast," Jax is confronted by Brittany's father and brothers. And yes, there are a lot of them. But how many brothers does Brittany have? Turn out, the Bravo reality star comes from a big family.

According to Bravo's website, Brittany has one brother and one sister. But, since her parents are divorced and her father remarried, she has two younger half brothers. This means that Brittany has a total of three brothers and one sister. And while the new episode might be the first time some fans meet Brittany's family, a few members of the Cartwright clan have appeared on the spin-off series, Vanderpump Rules Jax & Brittany Take Kentucky. Most notably, one of the episodes featured Jax and Brittany raising money for her brother, Wes, and sister-in-law, Melisha, who were looking to start in vitro fertilization.

"My beautiful, perfect, angel baby niece was born tonight! Look at my brother kissing her. Look what God did. I just love my family so much and I am sooooooo blessed I get to be here with them," Brittany shared on her Instagram. "Wes & Melisha are going to be the best parents! This baby is loved so so much! Our little miracle, Presley Tatum Cartwright."

Things have gotten a bit complicated since days of Jax & Brittany Take Kentucky. In 2018, Jax admitted that he cheated on Brittany with former SURver, Faith Stowers. Even so, Brittany stayed with Jax and they have since moved on. But, Brittany's family isn't going to let it slide just yet.

In a clip from Vanderpump Rules Season 7 Episode 20, Brittany's father and brothers sit down with Jax and have a talk. And it's just as awkward and uncomfortable as you would expect.

"You sent that picture and she was grinning from ear to ear with that big ring on her finger and that seems really important ... everybody was all excited about that, but what's important to me is the faithfulness behind it," Brittany's father said. "That's the most important thing. The rock doesn't mean anything."

Jax said he was prepared to go head-to-head with the Cartwright family on the matter and replied, "It's horrible that it took my dad to pass to figure all this sh*t out. I was going through my own personal issues when I did what I did."

However, Brittany's father and brothers weren't concerned with an explanation. They wanted to ensure that Brittany was in the right hands.

"Talking to Brittany, she seems to really care about you," one of Brittany's brothers added in the clip. "Don't know why after all you've done to her, but if you do screw up, your life will be a living hell."

Yikes. But Jax's response to Brittany's family is worse. After Wes told Jax that he wanted him to love and cherish Brittany the way that the family loves her, Jax answered, "Does she love and cherish me?"

Then speaking to the Vanderpump Rules team, Jax said, "I don't know what decade they're living in. That's maybe the way they live in Kentucky ... But what about making me happy? You also gotta take care of your husband."

While there's plenty to dissect from the two-minute clip, Brittany's father and brothers are dead set on laying down the hammer when it comes to Brittany's happiness. But TBH, they should be.