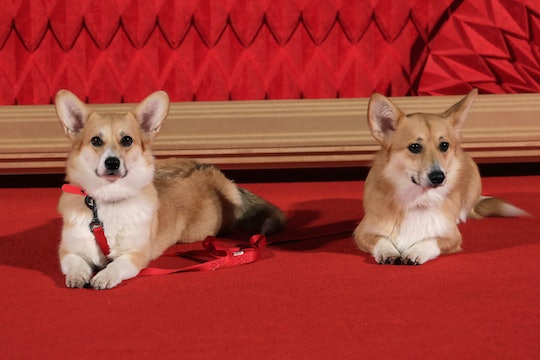 Queen Elizabeth II Is Also The Queen Of Corgis

I have a cat. She's a tiny cat — a small, adorable domestic shorthair who is the embodiment of a side eye. Her name is Pointy, and she turns 14 years old in November. I love her dearly, but darn it, I want a corgi. Actually, I want a hoard of corgis. So you could imagine my envy when it comes to Queen Elizabeth II and her litter of pups. But how many corgis does the Queen have? In short, enough to both herd my cat and an army of toddlers running wild in a playground.

Well, let me clarify: Queen Elizabeth had a small hoard of corgis — five, to be exact — but her last living one, Willow, had died in April, according to The Guardian. Willow was 15 years old at the time, and was battling cancer, so the Queen made the tough decision to put her to sleep. Willow's death marked the first time that the British monarch has not owned a corgi since the mid-1940s, The Guardian reported.

The Queen, though, is not without dogs. She still has Vulcan and Candy (the names, my God!), who are "dorgis," according to The Guardian. You read correctly: Dorgis.

A cross between a dachshund and a Pembroke Welsh corgi, dorgis are small in stature, and weight between 15 and 28 pounds, typically, according to Pet Guide. Like the two breeds, dorgis are short and stout, with stubby legs, long bodies, and large ears that stick up, Pet Guide noted.

In other words: The most amazing small dogs alive, aside from chiweenies.

So who created the dorgi? Queen Elizabeth, of course! The head of the British Royal Family invented the four-legged mix with her late sister, Princess Margaret, when she was a teen, according to Pop Sugar. It was before the Queen was given her very first corgi, a pup named Susan, when she turned 18 years old in 1944, Pop Sugar reported.

Susan began Queen Elizabeth's corgi dynasty. All of the corgis that the Queen owned — more than 30 in her lifetime — were descended from Susan, with Willow being the last, according to Pop Sugar. That's at least 10 generations of corgis the Royal family has cared for.

But Queen Elizabeth's corgi dynasty has come to an end with the death of Willow. In 2015, it was revealed that the British monarch had decided to stop breeding Pembrokeshire Welsh corgis, according to The Telegraph.

It's for a heartbreaking reason why Queen Elizabeth has chosen to stop breeding her favorite type of dog. Monty Roberts, a horse whisperer close to the Queen, has said that the matriarch doesn't want to leave any young dogs behind after she dies, according to The Telegraph. (The Queen had named one of her corgis after Roberts. His namesake passed away in 2012, The Telegraph reported.)

After Willow died earlier this year, a person with ties to Buckingham Palace told The Daily Mail that Queen Elizabeth:

...has mourned every one of her corgis over the years, but she has been more upset about Willow’s death than any of them. It is probably because Willow was the last link to her parents and a pastime that goes back to her own childhood. It really does feel like the end of an era.

Although Willow's death marked "the end of an era," the Queen still has two adorable dorgis by her side. And who knows? Maybe Vulcan and Candy (again, the names!) will start a whole new dynasty.

In the meantime, if anyone wants to gift me a dorgi, I would not turn that down.