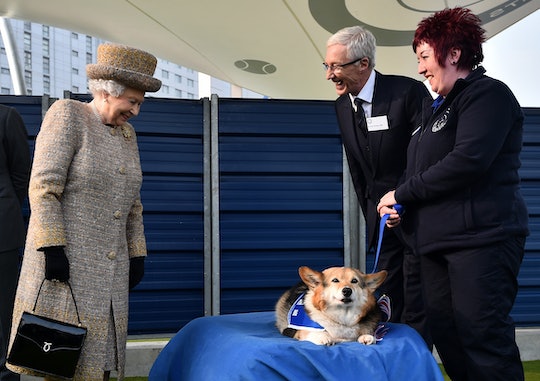 Queen Elizabeth II and I might not be friends, but I know a thing or two about her. She's a big fan of hats and crowns, for instance, and she gets to be the boss of her whole family which is cool. And if you want to get a smile out of this famously controlled monarch, there's one surefire way to win her affection; be a corgi. Her Royal Highness has had a rather baffling soft spot for these short-legged dogs for the better part of 80 years. Why does Queen Elizabeth II love corgis? Well, that's a bit of a mystery.

Nobody else in the royal family shares the Queen's undying devotion for corgis. And I do mean utter devotion; she brought her very first Pembroke Welsh corgi, Susan, on her honeymoon with Prince Phillip back in 1947. Susan was a gift given to her by her father, King George V, for her 18th birthday in 1944. Since then, the Queen has spent decades being surrounded by a "moving carpet" of corgis, as Princess Diana called them, each generation descended from Susan, according to The Daily Mail. Over time, Queen Elizabeth has owned over 30 corgis. The Queen stopped breeding her beloved dogs in 2015, reportedly because she didn't want any young dogs left alive after she was gone, according to The Guardian.

How much does the Queen love her corgis? The little dogs are so famous that a video featuring her last corgi, Willow, was shared at the 2012 London Olympics with none other than Daniel Craig playing James Bond. In the video, Willow accompanies Craig as Bond to Buckingham Palace, where the spy is given a mission from the Queen. No, I'm not making any of this up.

Sadly, Willow died at the age of 14 in April after suffering through cancer. Willow was euthanized at Windsor Castle, where she was subesquently buried. Buckingham Palace did not release a statement about Willow's death, but a Palace source told The Daily Mail that the Queen was hit especially hard by the death of her very last corgi:

She has mourned every one of her corgis over the years, but she has been more upset about Willow's death than any of them. It is probably because Willow was the last link to her parents and a pastime that goes back to her own childhood. It really does feel like the end of an era.

The Queen's love of corgis is a trait not necessarily shared by the rest of her family; neither Prince William and Prince Charles are said to like the little dogs very much, maybe because they are rather famous for biting people's ankles and being especially temperamental. Not even the Queen herself has escaped being bitten; in 1991, she had to have three stitches after being bitten by one of her dogs, according to Vanity Fair.

While some members of the royal family and staff might not be huge fans of the Queen's corgis, it seems the newest member of the royal family had no trouble winning them over; Meghan Markle. During an interview with the BBC after the couple got engaged, the Duke of Sussex admitted he was surprised at how quickly the dogs took to his fiancee:

For the last 33 years, I've been barked at. This one walks in, and absolutely nothing!

The dogs apparently curled up at her feet and slept as she drank her tea.

Queen Elizabeth, in turn, was kind to Markle's own rescue beagle Guy, who actually rode with the Queen to the royal wedding in May.

Nobody other than the Queen knows why she loves corgis, but I'm guessing it has something to do with family. Staying connected to her past, her parents, and her youth. Whatever the reason, it's nice to know her love of dogs is not solely corgi-specific. She doesn't mind showing a little kindness to a rescue beagle, and an American at that.

More Like This
33 A Charlie Brown Christmas Quotes To Fill You With Holiday Nostalgia
24 Children's Books For Your Dino-Loving Kid
When It’s Safe To Bring Your Newborn To A Restaurant, According To A Pediatrician
Snap A Pic Of Santa In Your Living Room With These Free Apps