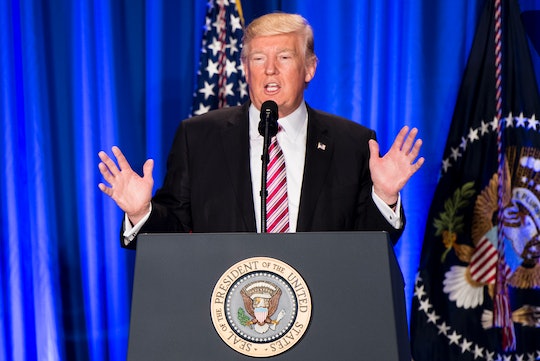 Immigrants Are Not Committing The Bulk Of Crimes

He's only been in office for a week, but President Donald Trump has already signed four executive orders to roll back some of President Obama's policies, including two focused on immigration policy. Part of Trump's immigration plan is to increase the deportation of undocumented immigrants, whom Trump claimed in his executive order “present a significant threat to national security and public safety,” according to The New York Times. As with many of Trump's polarizing claims though, the numbers don't exactly support his stance. How many crimes do immigrants commit each year? The data shows it's not a straightforward issue.

According to CNN, Trump's most recent executive order took aim at undocumented immigrants in an attempt to increase public safety. Trump spoke at length during his campaign about the alleged threat posed by undocumented immigrants — tied also into his support for a "huge" border wall paid for by Mexico — and now that he's actually in a position to act on that claim, he's wasting no time. The order calls for increased resources for deportation enforcement (including the addition of 10,000 more immigration officers), and also gives the federal government the ability to withhold funding to "sanctuary cities," where local law enforcement officers have discretion over whether or not to turn undocumented immigrants over to federal authorities.

In Miami-Dade county — a hub of immigration in the state of Florida, and a listed sanctuary city with the Department of Justice — Republican Mayor Carlos Gimenez has already stated his support for Trump's order, and in a memo Thursday, Gimenez instructed local law enforcement to "honor all immigration detainer requests received from the Department of Homeland Security," according to The Washington Post. Not all sanctuary city mayors have been as forthcoming though, and many — including Los Angeles Mayor Eric Garcetti, New York Mayor Bill de Blasio, and Chicago Mayor Rahm Emanuel — have said they would not be changing their policies, according to Bloomberg. This could, of course, lead to major financial consequences, but based on the numbers, it seems as though they have good reason not to jump to agree with Trump's orders.

Presumably to shore up public support for his immigration plan, Trump has instructed that the Secretary for Homeland Security should “on a weekly basis, make public a comprehensive list of criminal actions committed by aliens," and that the list should also name the sanctuary cities failing to comply with his orders. Even the notion of a list like that suggests that crime committed by immigrants is a massive problem, but according to the Cato Institute, studies show that, overall, immigrants are "less crime prone" than native-born Americans, or, at the very least, that they have no measurable effect on crime rates at all.

In a 2007 study published by the National Bureau of Economic Research, for example, researchers found that immigrants are incarcerated at a much lower rate — one-fifth — than native-born Americans, and that, contrary to Trump's campaign assertion that countries like Mexico are sending rapists and drug dealers into the country, "the process of migration" actually favors those "who either have lower criminal propensities or are more responsive to deterrent effects than the average native."

Of course, that doesn't mean that immigrants aren't committing crimes, or that those crimes don't matter, but it does mean that focusing on immigrants specifically as a major source of crime is something that isn't supported by research. According to the American Immigration Council, in both immigrant and native-born American populations, less educated young men are the group most likely to be incarcerated, and in the United States, that immigrant population is comprised predominantly of those from Mexico (as Trump has alluded), as well as El Salvador and Guatemala. But even then, those men still have a lower rate of incarceration than American-born, poorly educated young men: a 2010 study by the American Immigration Council found that

What's more is that incarceration rates alone do not explain the type of conviction that caused them to be sent to jail in the first place. And according to CNN, immigration-related offenses — not violent crime — are often behind many of these cases.

Then there are the numbers pertaining specifically to undocumented immigrants. Trump's executive order did not specify that he'd be increasing deportation rates among only undocumented immigrants, but even if he did, studies show that they aren't necessarily posing a threat as significant as he is suggesting. According to The New York Times, about 11 million of the 43 million immigrants in America are undocumented, and an estimated 820,000 of them have been convicted of a crime — 300,000 of which are felony convictions. That's still a serious matter, but isn't representative of the kind of national priority Trump has insisted it should be. According to The Cato Institute, although undocumented immigrants do have higher crime rates than legal immigrants, figures show that they still have lower crime rates than American citizens. And as The Cato Institute's Alex Nowrasteh noted to The New York Times, “there’s no way I can mess with the numbers to get a different conclusion.”

Given the statistical reality, it makes sense that sanctuary cities would be reluctant to agree with Trump's hardline take on immigration. According to CNN, sanctuary cities declined to honor 10,182 federal detainer requests in 2015, but that doesn't necessarily equate to turning a blind eye. That's because, according to The Atlantic, having the discretion over cases involving immigrants gives local law enforcement the ability to maintain a positive relationship with their city's immigrant populations. And studies have found when immigrant communities trust authorities, they report crimes, are safer overall, and generally more productive.

Furthermore, University of California at Irvine sociology professor Ruben Rumbaut told CNN that most ICE detainers that resulted in deportation happened "for reasons that have nothing to do with crime." And given that Trump's executive orders actually broaden the definition of the offenses that an immigrant could be deported for, that's presumably something that's will only increase.

According to Vox, Trump's executive order outlines that deportation efforts should be focused on those who have been convicted or charged of an offense, as well as those who "have committed acts that constitute a chargeable criminal offense.” That doesn't just mean violent crimes against innocent Americans, but immigration offenses like illegally entering the country, working or paying taxes with a fraudulent Social Security number, or driving without a license. That might all be illegal, and are issues in their own right, but they are hardly the threat to American safety he's made it out to be. Furthermore, the order even extends to anyone that federal officers consider a “risk to public safety or national security,” regardless of whether or not they've actually committed an offense. Or, in other words, pretty much any immigrant they don't want in the country.

Strengthening national security and deporting violent criminals is, of course, important, and should be a priority of any President. But Trump's executive orders suggest that immigrant crime is a much more severe issue than studies have actually been able to prove, and the consequences for immigrants could be significant.