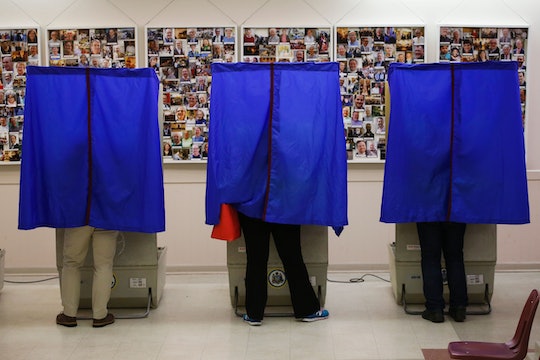 How Many Delegates Are At Stake In Tuesday’s Primaries? The Answer Is Complicated

On April 26, five states — Connecticut, Delaware, Pennsylvania, Maryland, and Rhode Island — will hold their respective primaries, and while each and every vote counts, what is really at stake? How many delegates are “up for grabs” in Tuesday’s primary? The answer is complicated.

But before I attempt to explain this week's primaries, let me explain what has happened to date: The first 2016 Presidential primary — well, caucus — was held in Iowa in on February 1. Texas Sen. Ted Cruz and former Secretary of State Hillary Clinton won the state, but neither won by a large margin. And thus began one of the most contested and contentious primary seasons.

Since the Iowa caucus, more than 40 primaries or caucuses have been held in numerous states and U.S. territories. Since the Iowa caucus, nine Republican candidates and one Democratic candidate have dropped out of the race. And since the Iowa caucus, two front-runners have emerged: business mogul Donald Trump and Clinton. But no one has won their parties' nomination, at least not yet, which is why today's election matters. In fact, it is why all votes – and voters — matter. So, what is at stake on April 26?

On the Democratic side of things, there are 384 delegates available. These delegates will be awarded proportionally. But there are also 80 “pledged delegates” up for grabs, and according to ABC News, Clinton already has the support of 67.

But wait, are you confused yet? I hope not, because it gets worse.

Pennsylvania has 71 Republican delegates available but only 17 of 71 will be determined at the polls. The remaining 54 delegates will enter the national convention unbound to any candidate, according to CNN. What’s more, there is no cut-and-dry, across-the-board system for how the remaining four states divide their delegates. (Connecticut and Rhode Island will award their delegates proportionally, Delaware is a winner-take-all state, and in Maryland, the winner of the statewide vote will get all of the at-large delegates — 14, in case you’re wondering — while the remaining 24 will be appointed congressionally: i.e. there are eight congressional districts with three delegates available in each district.)

What Does All Of This Mean?

Regardless of how things shake out on either side, one thing is certain: Neither Clinton nor Trump will be able to clinch their parties' nomination tonight, making the May and June primaries more important than ever.