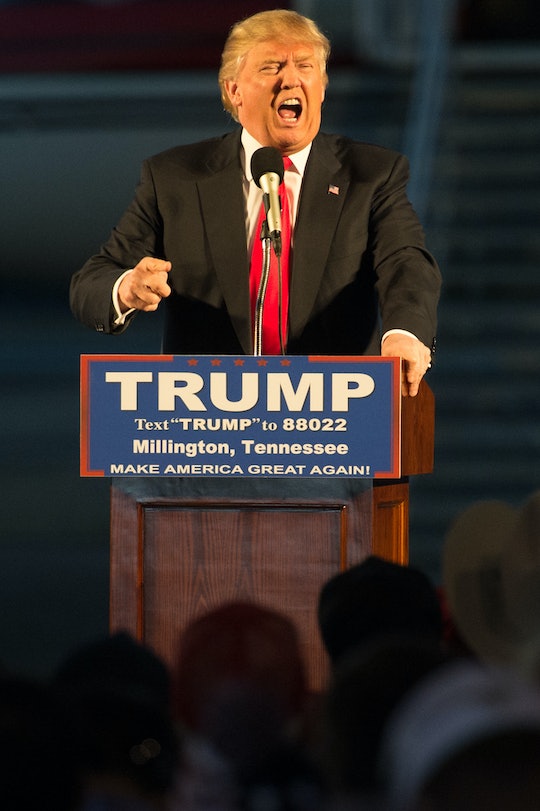 How Many Delegates Does Trump Need To Get The Nomination? He's Getting Frighteningly Close

It's a day that many of us never saw coming: businessman and former reality show host Donald Trump might actually end up on the ballot this November. He's winning left and right, and it's actually pretty terrifying. So how many delegates does Trump need to win the nomination? He's still about 1,000 away, but that's not as far off as it seems.

Going into Super Tuesday, Trump had secured 82 delegates after the Iowa, New Hampshire, South Carolina, and Nevada primaries and caucuses. Trump is now projected to win the Republican primaries in Alabama, Georgia, Massachusetts, Tennessee, and Virginia, which would bring him to a total of 221 delegates, leaving him 1,016 delegates shy of winning the Republican nomination for President of the United States of America, and I sincerely hope that no readers have just destroyed their electronic devices via spit-take after reading that.

A Trump presidency is no longer the fun thought experiment that it was a year ago; this could very well be our future. Trump spoke live from his campaign headquarters on Tuesday night, after being declared the projected winner in five states, and if anyone expected him to tone down his act after becoming a more viable candidate, those people were disappointed.

Trump was introduced by New Jersey Gov. Chris Christie (his future running mate?) whose facial expressions grew increasingly terrified-looking as Trump doubled down on every shocking thing he's ever said during his campaign. Trump actually briefly praised Planned Parenthood, saying it has helped many women, before clarifying that he took issue with the organization providing abortions. He then reminded America that he'd be "really good for women." Soon afterwards, he shouted down a female reporter who questioned him on his plan to ban Muslims from entering the U.S.

Trump also reiterated his plan to force Mexico to pay for a wall along the U.S. border, insulted Florida Sen. Marco Rubio ("he's a lightweight"), and implied that his likely opponent, former Secretary of State Hillary Clinton, will be unable to legally run for president, because Trump believes that she's a "criminal." Oh, and he mispronounced Qatar. Ladies and gentleman, this is the man that's closer than anyone to becoming the Republican nominee for president. This is happening.