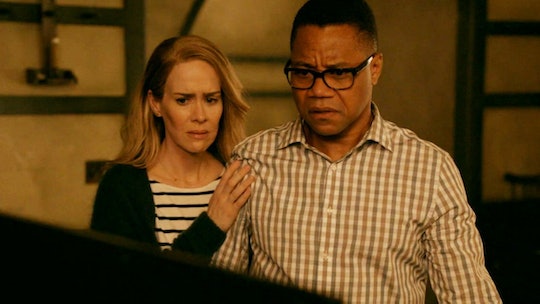 How Many Episodes Is 'AHS: Roanoke'? Season 6 Is The Shortest Season Yet

It's no secret that Season 6 of AHS has been a little different. And with the body count rising and things getting very real on AHS: Roanoke, it's probably time to take stock of how much time we have left. So, how many episodes is AHS: Roanoke? If you felt like things were going pretty fast this season, it's probably because they've allotted just 10 episodes for the story to play out, rather than the usual 12 or 13 that most of the past seasons have had. In fact, this season has the least amount of episodes than any other AHS season before it, which is a depressing thought to say the least.

AHS: Roanoke began differently than all of the other seasons fans have seen so far and has even progressed at a considerably different pace due to this totally new style. It's also a season that Ryan Murphy chose to keep under wraps, even from his stars, until it was absolutely necessary to know the details. So to have the differences spill over into the limited number of episodes makes a little bit of sense, even if no legit AHS fan would ever wish for a shorter season. But it does make the experience all the more intense...

Murphy has said that keeping Season 6 such a huge secret was work in itself and that in future seasons, he doesn't plan to keep everything so hush hush. Maybe that's the reason why AHS: Roanoke has a mere 10 episodes this year: it was just way too much work to keep it secretive for so long. You also don't want to have a story be dragged out and stretched so much that you feel like you leave each episode with just a tiny snippet of a reveal.

Instead, Season 6 has been able to keep the excitement level up during each episode, giving viewers something to take away, but also leaving them with questions to keep them coming back for more. Why waste time with filler episodes or side storylines that make the season too messy to follow? AHS: Roanoke has been able to move along smoothly and at a fast clip to hold audience interest. So, in a way, maybe cutting the season actually works in its favor.

Is it ideal for any diehard fans out there? Obviously not, but as most AHS fans would be happy to watch back-to-back seasons forever and ever, a shorter Season 6 means that you'll continue to get good, solid, and full episodes from start to finish. And with logic like that, how can you argue?