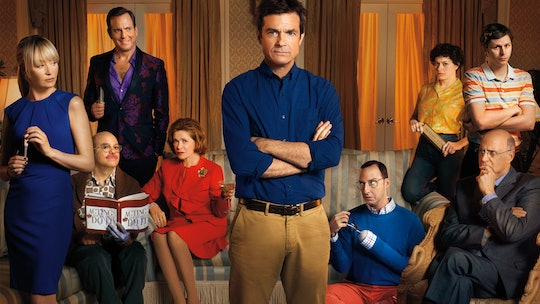 'Arrested Development' Season 5 Will Be The Show's Shortest Season Yet

On Mar. 15, the Bluth family saga continues as part-two of Arrested Development Season 5 premieres on Netflix. The first half of the revived series aired eight episodes on the streaming service in May 2018, and has since been forgotten by viewers. However, with the second half well on its way, fans are getting excited. But given the strange release schedule for the comedy, particularly for a Netflix series, fans are wondering how many episodes are in Arrested Development Season 5.

In Feb. 2019, Netflix announced that there would be eight episodes in the second half, matching the number of the season's first half. This means that Arrested Development will receive a total of 16 episodes in Season 5.

While it is uncertain why Netflix decided to split the season into two, the same technique has happened with other shows on the streaming service, such as The Ranch and Unbreakable Kimmy Schmidt. Entertainment Weekly suggests that the split is intentional, as it allows the shows to be considered for an Emmy, which has a deadline of May 31.

Regardless of why the split it happening, fans will be happy to see how the fifth season concludes after a painfully long midseason hiatus.

When Netflix decided to revive Arrested Development six years after its cancellation on Fox, the streaming giant received a bag of mixed reviews. So what will the Arrested Development team do to revive interest in the series? In a press release per The New York Times, it looks like part-two will return where the fifth season left off. The release stated:

Pressures mount on the Bluth family as Buster heads toward a murder trial. The Bluth company is on the hook to build a ‘smart’ border wall that puts them in debt and risks exposing a software hoax perpetrated by George-Michael. Soon the gay mafia is involved and it appears that even Michael can’t save the family this time. And Tobias becomes a Golden Girl.

The premiere of part-one of Season 5 was overshadowed by an interview in The New York Times when Jeffrey Tambor was brought up after being fired from Amazon's Transparent for accusations of sexual misconduct.

In the interview, the show's male co-stars seemed to jump in support of Tambor. In response to Tambor's "blowup" with Jessica Walter in an interview with the Hollywood Reporter, Jason Bateman stepped in and told the publication that they've all done something similar, later explaining that it's common for people in the entertainment industry to be "difficult".

Alisa Shawkat refuted and reminded Bateman that his explanation didn't mean the behavior was acceptable. Walter also revealed that Tambor verbally harassed her and crossed the line. "In like almost 60 years of working, I’ve never had anybody yell at me like that on a set," Walter said. "And it’s hard to deal with, but I’m over it now."

After the backlash from fans of Arrested Development, including the cancellation of the show's UK press tour, the actors —including Bateman — apologized for their comments in the interview.

Following the controversy and a lack of interest from fans, the end of Season 5 could potentially be its last. But, with the release of part-two, fans will just have to wait and see.

The second half of Arrested Development Season 5 premieres Mar. 15 on Netflix.