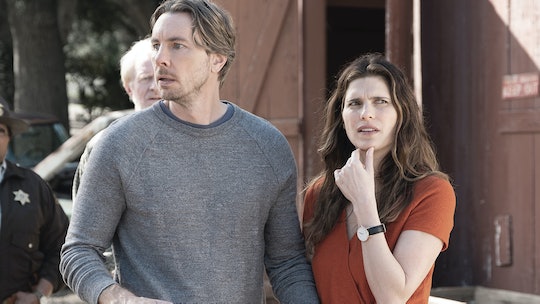 Living the simple life isn't always as easy as it seems. On Apr. 16, ABC premiered Bless This Mess, a comedy series starring Parenthood's Dax Shepard and Childrens Hospital's Lake Bell, who is also co-created the show. While reviews have been mixed, fans of the new series are gearing up for the new adventure that lies ahead. But how many episodes is Bless This Mess? As of now, the show is expected to have a short run.

Per Deadline, Bless This Mess was passed up by 20th Century Fox Television back in Dec. 2018. However, the show was later picked up by ABC Studios for a six-episode order. While the episode count for Bless This Mess may seem low, the network is known for ordering additional episodes if shows are doing well. ABC comedies like The Kids Are Alright and Splitting Up Together received shorter season orders and were later given more after airing a few episodes with solid performances.

That being said, it seems that the network has high hopes for the series. After Fox decided not to pick up the single-camera comedy, Karey Burke, the president of ABC Entertainment, explained why ABC chose to snag Bless This Mess.

"Bell and Shepard headline a stellar cast in this hilarious take on a classic fish-out-of-water story that we found irresistible," Burke said.

According to ABC, Bless This Mess follows a newlywed couple, Rio (Bell) and Mike (Shepard), who suddenly decide to move from New York City to a rural area in Nebraska when Mike's aunt leaves him the family farm. Despite having a fear of cows, they drop everything, from their way of life to their city jobs, in order to live a simpler life in a farmhouse. As expected, neither of them know what they're getting themselves into. However, Rio and Mike must learn how to face their new lives together as well as the many challenges that come with being a farmer.

In an interview with The Wrap, Bell revealed that as the series continues, Mike and Rio will begin to integrate themselves with the surrounding community.

“Here are these outsiders, this sort of coastal, new age, hipster couple descending upon a small town ecosystem that’s running very well, that thrives in its core values," Bell said. "It’s not gonna save the world, but it definitely is a loving embrace between those two communities."

However, not before having a few bumps in the road, including a personal wake-up all for mike. Bell shared that Mike "envisions himself as very capable" of taking care of the farm. However, "what you do as an 11-year-old on the farm is very different than being a full grown man who needs to run an operation.”

Meanwhile, Rio deals with a few challenges of her own. Still speaking to The Wrap, Bell explained that her character has “multiple anxiety disorders linked in and around the bovine species." Though, Rio's leap of faith despite her fear of cows also reflects what Bless This Mess is trying to convey.

In an interview with Vulture, Bell said, "We found a lot of fodder and fun in the idea of doing a fish-out-of-water story: people who are steeped in their neuroses, transplanting those people to a farm or a rural environment."

Bless This Mess might not have a high episode count, but the new ABC comedy has plenty of promise for those looking for a fun "fish-out-of-water" series in 2019.