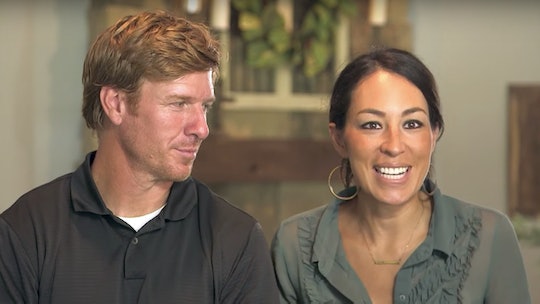 When everyone’s favorite home design couple announced that Season 5 of Fixer Upper would be its last, I assumed the worst. But then Chip and Joanna Gaines announced that Jo would be getting a spinoff, Behind The Design, and all was right in the world again. But before that premieres in March 2018, we can all enjoy the final season of the show that started it all for the couple. So, how many episode is Fixer Upper Season 5?

Although HGTV will be saying goodbye to Chip and Jo in early 2018, fans will at least have "no less than 14 new episodes," according to HGTV, as well as four Fixer Upper specials to get through before they say bid farewell to the popular home renovation series. And, according to a press release detailed by Us Weekly, HGTV went all out for Season 5 in terms of celebrity guest appearances, Because, why not? Also, this is Chip and Jo — they basically deserve the world.

Two of the special guest stars for Season 5 include former First Lady Laura Bush and ex-NFL player Tim Tebow, so Chip and Jo are definitely going out on a high note. Though to be honest, I'm pretty sure the show could have lasted another five seasons and still maintained just as dedicated of a fanbase.

Not only are they fun to watch as a couple who can totally transform any home or space, but they also give so many of us house goals. Who hasn't watched Fixer Upper and at one point been so inspired that they thought, "I can totally take out this wall and create an open concept in my 800 square-foot home"? Thankfully, Season 5 will continue to give fans some more of what we’ve all loved from the Gaines family for the duration of the show.

Although Fixer Upper’s final season will mean that there’s no more of that special dynamic between Chip and Jo as they help couples find and renovate homes, there’s no denying that 2017 has been a successful year for the dynamic duo. Chip released his book The Smart Things I've Learned by Doing Stupid Stuff in October 2017 and the couple’s success is only continuing to rise. According to HGTV, Jo’s spinoff, Behind The Design, will still feature both Jo and Chip, but will focus mainly on Jo’s design tips and the strategy behind some of the genius interior design and renovation we’ve all witnessed on Fixer Upper over the years.

But the Gaines' have also been busy with their much-loved Hearth & Hand line for Target, which premiered in-stores this November. In partnership with Target, Jo and Chip’s company, Magnolia, created a line of home decor and even holiday pajamas (my family is legit going to be decked out this Christmas) to help you bring some of Jo’s amazing designs into your home and life. So I’d say if 2017 was a success for the couple, then 2018 and the premiere of their new design show for HGTV will prove to be another favorite, much like Fixer Upper has been.

Season 5 premieres on Nov. 21, just in time to give you something to look forward to this holiday season, other than stuffing your face for Thanksgiving and spending copious amounts of money shopping for presents. Don’t think of it as losing a HGTV staple, but rather gaining a new series from the Gaines dup (see what I did there?) to hopefully last as long, if not longer, than the home improvement series that started it all. And with at least 14 episodes and four specials, Fixer Upper will definitely have a full final season to enjoy.