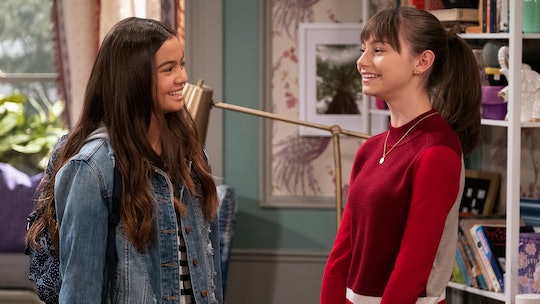 Melissa Joan Hart has come to Netflix. And no, she's not making a cameo on Chilling Adventures of Sabrina — at least not for now. On Monday, Apr. 15, Netflix released the family mystery dramedy No Good Nick, and it is unlike anything you've seen before. So how many episodes of No Good Nick are there? There will be plenty of material for fans to obsess over in the next few weeks.

According to TV Line, the first season of No Good Nick received a 20-episode commitment back in Sept. 2018. This is a notably longer episode count than other family shows, such as One Day at a Time and Fuller House, which both came in at 13 episodes per season. Nonetheless, the increased amount of episodes may account for the show's complex — and frankly fresh — take on an American family comedy.

Per Netflix, No Good Nick follows a 13-year-old girl named Nick (Siena Agudong), who is taken in by a family of four after she claims to be a distant relative in need of a new home. The catch? Nick is plotting revenge on the family, who unknowingly ruined her life. However, as she gets to know the family, she begins to feel for them and she starts to struggle with her original plan. So basically, No Good Nick is the kid version of ABC's Revenge.

In an interview with NBC's Access Live, Hart and co-star Sean Astin, who plays her onscreen husband, revealed that No Good Nick will surprise audiences with every episode, especially since viewers who do not already know the premise of the show will not immediately see the vendetta.

"It's really unique and we can do that because it's on Netflix," Hart said. "We started out being like 'this is a comedy' and then we were like 'wait, this is not a comedy.'"

Astin echoed his co-star's comments and explained why the show isn't the sitcom audiences probably expect when they first start watching.

"I like sitcoms. I grew up with sitcoms," Astin said. "You can trust them, the families are nice, it's a laugh track, everything's good, and then in our show you're like... 'huh, what just happened?'"

Clearly, No Good Nick isn't going to be your typical family sitcom. But that's what sets it apart from the rest. Speaking to The Boston Globe, Hart explained what audiences can expect from the show's debut season.

“It’s a character I haven’t played before, and it’s a show I haven’t seen before,” Hart said. “As you go episode by episode, you peel back the layers and learn more about why this girl is scamming this family, this seemingly innocent family she’s out to get. And as you watch this adorable, charming little girl do these awful things to this family, somehow you kind of justify it.”

Nonetheless, Hart admitted that at its core, No Good Nick is still a family show. "You’ve got the story for the kids and the story for the adults happening," Hart told People. "But the whole thing follows along the same track, so it really is a show the whole family can watch together."

With a full 20-episode commitment for its first season, No Good Nick looks promising, especially for anyone looking for a new kind of sitcom to watch with the whole family.

No Good Nick is now streaming on Netflix.