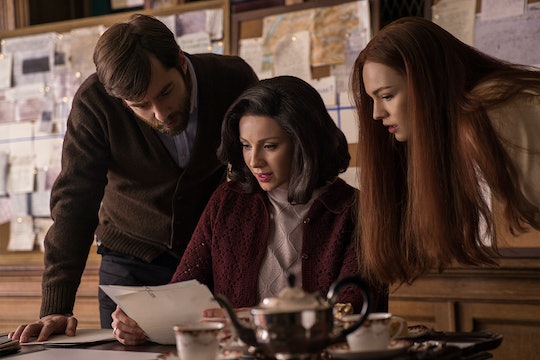 Won't Be Able To Get Enough Of 'Outlander' Season 3

Good news, Outlander fiends, the show is finally back after the longest year and a half ever, which means that fans get to bask in the glory of Sam Heughan's roguish smile and Caitriona Balfe's glorious acting skills for several more weeks. But how long will this time in paradise last? How many episodes is Outlander Season 3? Well, it'll be shorter than a season of a typical primetime network show, but still longer than Game of Thrones. So there's that.

The first season of Outlander did something cruel and unusual. It aired half of the season in the fall, ending on Episode 8, with Jamie climbing through a window and pointing a pistol at Jack Randall who is literally seconds away from raping Claire. I read the books and knew what was going to happen and this cliffhanger still nearly drove me up the wall. The show picked up again in the spring. The wait may have been agonizing, but the upshot of it was that Season 1 lasted for a few episodes longer than Season 2, which was presented all at once (thank God) but only had 13 episodes rather than 16. From what I can tell, Season 3 is going to follow the Season 2 model, with 13 episodes in a single shot.

The details about these episodes, however, are still rather sparse. This can be a good or a bad thing depending on your opinion of spoilers. I am slightly Outlander obsessed, having begun reading the books way earlier than I probably should have (hey, it was an education). So I know what's going to happen, but I still don't know how the show plans to present it to me. The book version spends a lot of time in the beginning with Claire and her daughter Brianna learning about what happened to Jamie and how to get back through the stones. What happened during their separate lives is revealed through Claire's memories and Jamie telling her his story.

The series, however, is going to show us snippets of these 20 years differently. It looks like for the first few episodes at least, Claire will be trying to raise a child and become a surgeon in sexist midcentury Boston while trying to exist in her fractured marriage. Meanwhile, Jamie will be fighting battles, getting imprisoned, traveling, and living in a cave (typical Jamie stuff). If IMDB is to be believed, Jamie and Claire will finally reunite in Episode 6, entitled "A. Malcolm," which is almost definitely a reference to the famous print shop scene.

You see, Jamie's full name is James Alexander Malcolm Mackenzie Fraser. So by that account, A. Malcolm could easily stand for Alexander Malcolm. Sounds like a nice secret identity for a print shop owner, don't you think? Just some food for thought.