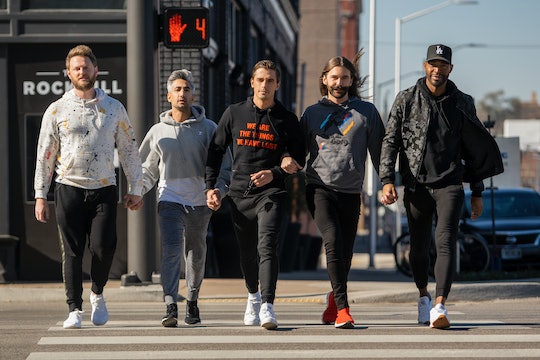 'Queer Eye' Season 4 Is Ready To Break Your Heart (Again)

The Fab Five are back on Netflix July 19, where they will continue to preach the gospel of self-care, self-love, and basic aesthetic principles to the people of Kansas City, Missouri. In order to most efficiently plan your weekend you need to know how many episodes Queer Eye Season 4 is — because true fans of experts Jonathan Van Ness, Tan France, Bobby Berk, Antoni Porowski, and Karamo Brown, always want more.

Netflix isn't about to start fixing a formula that isn't broken — Queer Eye Season 4 will be eight episodes according to the streaming site. You may be aware that the show has already been renewed for Season 5, and that's when the guys will pack up and move to the east coast to inspire the city of Philadelphia. But the move won't happen until 2020. Who will fans meet on Season 4?

One standout episode features Wesley Hamilton, who was paralyzed by a shooter in a dispute over an ex-girlfriend in 2012. With the help of the Fab Five (Karamo especially) Hamilton faces the man who shot him face-to-face, something he's been ready to do for a long time.

“Truthfully, in, like, my process of personal growth and everything I have been doing, I couldn’t do that without forgiving the person who put me in that position,” Hamilton told The Kansas City Star about why he forgave the man years before Queer Eye gave them a chance to talk. Hamilton started a non-profit called Disabled But Not Really in 2016 to help people with disabilities stay in shape physically and mentally. The program helps individuals combat issues like obesity and depression. Both conditions affect the disability community at high rates.

If all of the episodes this season pack that much of an emotional punch, I completely understand why there are only eight. But thanks to the official trailer, I know to keep tissues on hand because in another episode Jonathan brings the boys to his nearby hometown, where they make over his beloved former orchestra teacher. The makeover is a way for him to say thank you for a really amazing reason. "You've literally saved people's lives. Mine included," he says in the trailer while crying.

The experts have never helped someone they know before, and fashion expert Tan told In Style that this element adds a little more depth to the show. "It’s the first time we're helping somebody that has helped a whole community, including Jonathan. That's going to be a very special moment for the fans of Queer Eye," he said.

Tan called this season "our most emotional season yet." Considering the fact that this show became famous for its heart-forward approach to makeovers and tendency tug at the heartstrings in unexpected ways (remember Tom!?) — those are some big words. So when they eight episodes drop on Netflix you'll have to check it out and verify for yourself. As for me, to be honest I don't know if I can handle it.