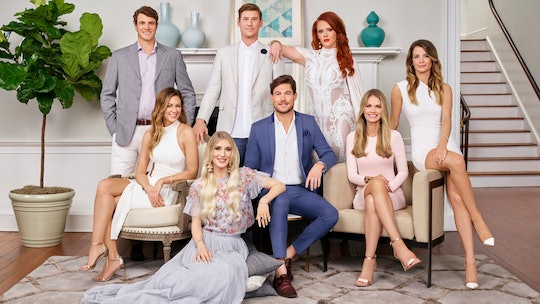 Sorry, 'Southern Charm' Season 6 Might Be Shorter This Year — Here's Why

The network that brought you reality show classics like The Real Housewives franchise and Vanderpump Rules is back with Southern Charm Season 6. And you know that the Bravo series has an abundance of Charleston drama to air out when Austen Kroll, Kathryn Dennis, Cameran Eubanks, Craig Conover, Shep Rose, Chelsea Meissner, and Naomie Olindo return on May 15. But how many episodes is Season 6 of Southern Charm? As of now, it looks like the reality series will have a shorter episode count than previous seasons.

According to Us Weekly, the sixth season of Southern Charm is currently set to air 10 episodes. However, the last season to have a 10 episode count was Season 1, with Seasons 2-5 receiving at least 12 episodes each, including reunion specials. But Bravo could still order more episodes and add on a three-part reunion following the original 10-episode long run.

That being said, the publication also revealed why Southern Charm Season 6 will be shorter than usual — the production team began filming Southern Charm later in 2018. “Even though they started filming later, it’s still ending at the same time and will be a short amount of time to film,” a source told Us Weekly.

While the Bravo series will likely feel like previous seasons, there have been a few notable changes in the Southern Charm cast. In the premiere, fans of the reality show will be formally introduced to Eliza Limehouse, a ninth generation Charlestonian and socialite.

Meanwhile, the sixth season will also be the show's first without one of its cast members, Thomas Ravenel. Following sexual abuse allegations in 2018, the reality star was let go from the Bravo series.

Speaking to The Blast, Ravenel shared his take on Southern Charm. And no, he's not happy about it.

“The worst mistake of my life was agreeing to be the star of the reality TV show Southern Charm," Ravenel said. "It amplified my past notoriety, showcased my wealth I accumulated through decades of hard work, and made me a walking target for men and women eager to get in front of the camera. Most importantly, it caused embarrassment and pain to my parents, my sisters, and my children.”

Regardless of how Ravenel feels about the Bravo series, Season 6 will address his absence. In an interview with Decider, Ravenel's Southern Charm co-star, Shep Rose, revealed what it was like to film without him.

“We knew there would be a void, there’s no question about that,” Rose said. "Honestly we were all sort of, I wouldn’t say nervous, but pensive about how the season was gonna go. Like it or not or even if we were cognizant of it or not, we leaned on Thomas. He’s a larger than life personality. So it was like, who’s gonna pick up the slack? Everybody’s looking around like, ‘You do it,’ ‘No you do it.'”

As for what else this season has to offer, the cast ensures fans that there's still plenty of drama to unfold.

“[Season 5] was a pretty wild one, but this year’s similar,” Craig Conover told Decider. “It’s a different structure of problems and controversies but the struggles are still there. I think it’s gonna be a good one.”

Whether Southern Charm Season 6 is 10 episodes long or 17, fans can get ready for more adventures ahead, even without one of the show's original cast members.