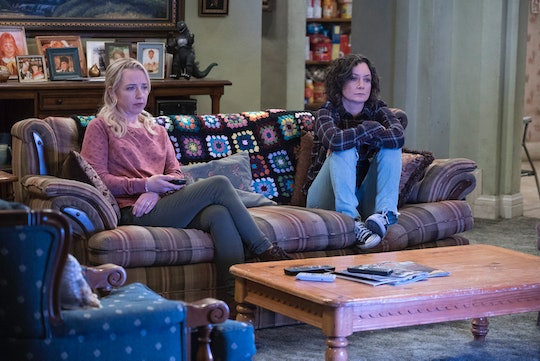 'The Conners' Was Given A Straight To Series Episode Order

When the Roseanne reboot premiered on ABC in March 2018, it was the long-awaited continuation of everyone’s favorite blue collar TV family. But after Roseanne Barr’s racist comments on Twitter about Barack Obama’s former adviser, Valerie Jarrett, Barr was fired from the show and its fate was left up in the air. The Conners, yet another spinoff, premieres on ABC on October 16 and will follow the rest of the family. But how many episodes is The Conners? And, more importantly, will it last longer than the first attempt at a reboot of the original? Barring any other scandals and provided that the same kind of relatable humor is still there, I’d say that the rest of the cast can carry The Conners forward. And, according to Deadline, The Conners is 10 episodes.

All of the returning cast members signed new one-year contracts for the show, though, so it’s still unclear if it will last beyond one season. "The Conners' stories demonstrate that families can always find common ground through conversation, laughter and love," ABC said in a statement obtained by Deadline. "The spinoff will continue to portray contemporary issues that are as relevant today as they were 30 years ago."

After Barr’s offensive tweets back in May, some of the cast and crew from Roseanne began pulling from the show. Emma Kenney, who plays Harris, tweeted that she was "hurt, embarrassed, and disappointed," and that, "The racist and distasteful comments from Roseanne are inexcusable." She also tweeted at the time that she’d called her manager to quit the show just as she heard the news that the spinoff was cancelled.

Wanda Sykes, who was a consulting producer on the Roseanne reboot, also tweeted that she wouldn't be returning to the show after Barr’s offensive tweets. After everything that followed, producers seemed to scramble to figure out what could be done with the show, short of scrapping any plans they might have had for future seasons. Given the fan reception after the first few episodes aired, it was clear that the reboot had the potential to last several more seasons.

Although the reboot was cancelled and won't be back, along with Barr herself, ABC announced in June that The Conners would be a spinoff to the reboot and continue to follow the family, sans Barr, but with the rest of the original cast returning to reprise their roles.

According to ABC, The Conners' 10 episode order will include a lot of new struggles for the family. "This iconic family — Dan, Jackie, Darlene, Becky and D.J.— grapples with parenthood, dating, an unexpected pregnancy, financial pressures, aging and in-laws in working-class America," the description says. "Through it all, the fights, the coupon cutting, the hand-me-downs, the breakdowns — with love, humor and perseverance, the family prevails."

The financial pressures are a given since this is still the same Conners family who got through the '90s by paying bills past their due date and living on the prayer that their electricity wouldn't get turned off before the check bounced. But it will be interesting to see Darlene take a potentially center role as the new matriarch. And the whole unexpected pregnancy arc is definitely going to throw the family for a loop, regardless of who it involves.

It’s hard to say if Season 1 will pave the way for a fast renewal, as with the original reboot, but the rest of the Conners family played big roles in making the show what it was over the years. There’s no reason to think they wouldn't be able to hold their own, even with Barr no long part of the cast.