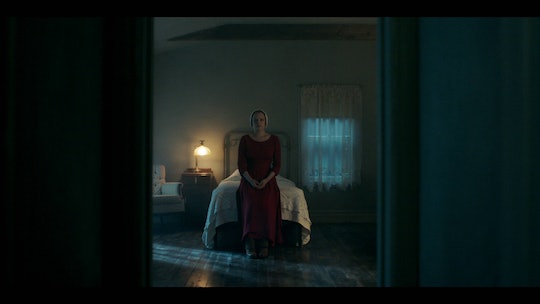 'The Handmaid's Tale' Is Being Released In A Unique Way

Much like Netflix, when Hulu releases an original series, it tends to do no wrong and even though the episodes are released weekly rather than all at once, viewers never really have a hard time following them. With its newest series, The Handmaid's Tale, the first three episodes will be released all at once, but after that the series will continue with weekly episodes. But after the initial tease, viewers will probably find themselves asking, how many episodes is The Handmaid’s Tale?

Hulu’s new series, starring Mad Men’s Elisabeth Moss, is 10 episodes long for its first season and follows the established universe based on Margaret Atwood's novel by the same name. Releasing the first three episodes of The Handmaid’s Tale on Hulu all at once might disappoint fans when they realize it’ll be going back to a weekly format directly after, but the streaming service is likely doing it that way in order to establish (and prolong) the story.

And, it’s a doozy. The world within The Handmaid’s Tale is completely totalitarian, where all of the women are categorized into different colors to let men and the other women know their place in their society. And if you try to deviate from the established rules in any way, you better believe there will be consequences.

The cooks and cleaners (known as "Marthas") are in green; the wives of the Commanders are in blue; the women who train the Handmaids are in gray; and then, of course, there are the Handmaids themselves. The women, dressed in red to make them stand out even more than the rest of the women, are the last of the fertile women in their world. Their sole purpose is to become impregnated by their assigned Commanders, whose wives are mostly infertile, so that they can provide the couple with a child. They have no choice in the matter and have no claim to the child once it is born.

The trailer alone for The Handmaid’s Tale is intense and takes place in the not-to-distant future from now, which is chilling in and of itself. Naturally, there will be a lot of ground to cover and a lot of setup to do at the beginning of the series, which might be why Hulu is releasing the first three episodes of The Handmaid’s Tale all at once, followed by seven more, which will be available each week after. If you weren't already planning on watching, I suggest you reconsider. Given the subject matter, this show is a definite must-see.